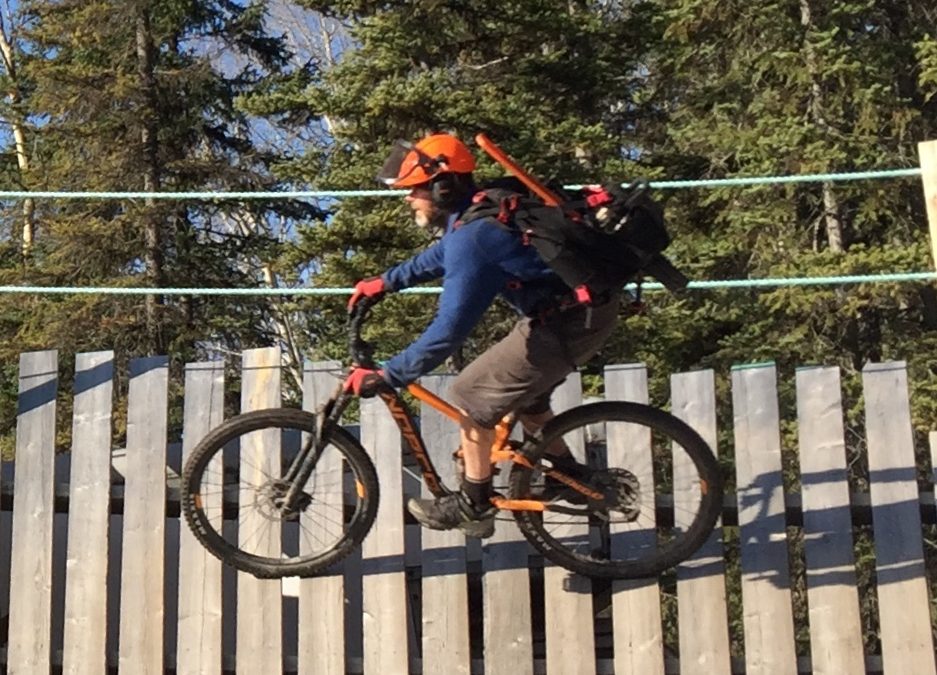 Without a doubt, BLMBA would like to nominate Dave Sandsmark as our local hero.

Back in 2005, Dave and a few others attended the IMBA World conference in Whistler where he listened to trail-building tales from other communities,  rode “Heart of Darkness” in the Bike Park nine times in-a-row,  visited a friend in the hospital after not quite landing the progressive drop option, and, like Tom Cruise preaching to a room full of venture capitalists,  returned to Burns Lake as an apostle of trail building.

Thus began, Burns Lake’s weird and wonderful journey as a mountain biking destination for the North of BC and beyond. Dave has worked tirelessly on fulfilling BLMBA’S (Burns Lake Mountain Biking Association) somewhat hubristic mission statement: to create a World-class system of  Mountain Biking trails and establish a vibrant riding Community (IMBA Canada liked this so much they “borrowed” it for their national mission statement!). If we have met this mandate in any way, it is because of Dave.

Dave is an accomplished,  avid rider, who inspires others by his tireless devotion to mountain biking. He is the architect of our trails and technical features. As a cabinet maker, he jokes that “we are not building a piano”, but you would be forgiven for not believing him as you rail the perfect berms or ride his precisely-engineered technical stunts. He is the brainchild behind all of our wooden features, including the 240’ Corkscrew Bridge (named the “Other Woman” because he spent so much time on her!), the Pierce Hofer Memorial Wallride (a  16 foot high x 100 foot long, curved wooden replica of a banked Velodrome corner!), and the Ewok Village (a 700’+ foot, multi-level raised boardwalk that weaves in and out of our campground). One of our trails, Pigasus, seemed destined to be forever disconnected due to a 100-meter cliff band that was impassable. Only one person could convince us to hand-carry six telephone poles down the trail to create an artificial bank which we back-filled by hand to create a 6-foot vertical retaining wall out of cliff rock and boulders over the next 3-4 weeks. Dave.

In short, we nominate Dave Sandsmark as our local hero. He is an incredible rider, tireless trail builder, visionary designer, and consummate organizer (he coordinates our weekly Wednesday work bee where we have regularly 20+ people show up all year round). As a PMBI certified instructor, he also coaches bike camp, works with the High School Mountain Biking Team & Project Trails Program and has initiated an  Indigenous Youth Program aimed at bringing First Nations Youth to the trails. During winter, Dave is the driving force (quite literally on the Rokon)  behind our Fat Biking Trail grooming (Of course) which is quickly establishing itself in the surrounding communities as an unrivalled resource. Whether he is driving his shuttle van up the hill, carrying a chainsaw on his back (often), or loading up the Rokon for trail maintenance, Dave smiles at you and looks exactly like what he actually is- a big-hearted, dirt-bag mountain biker who is doing exactly what he loves to do.*