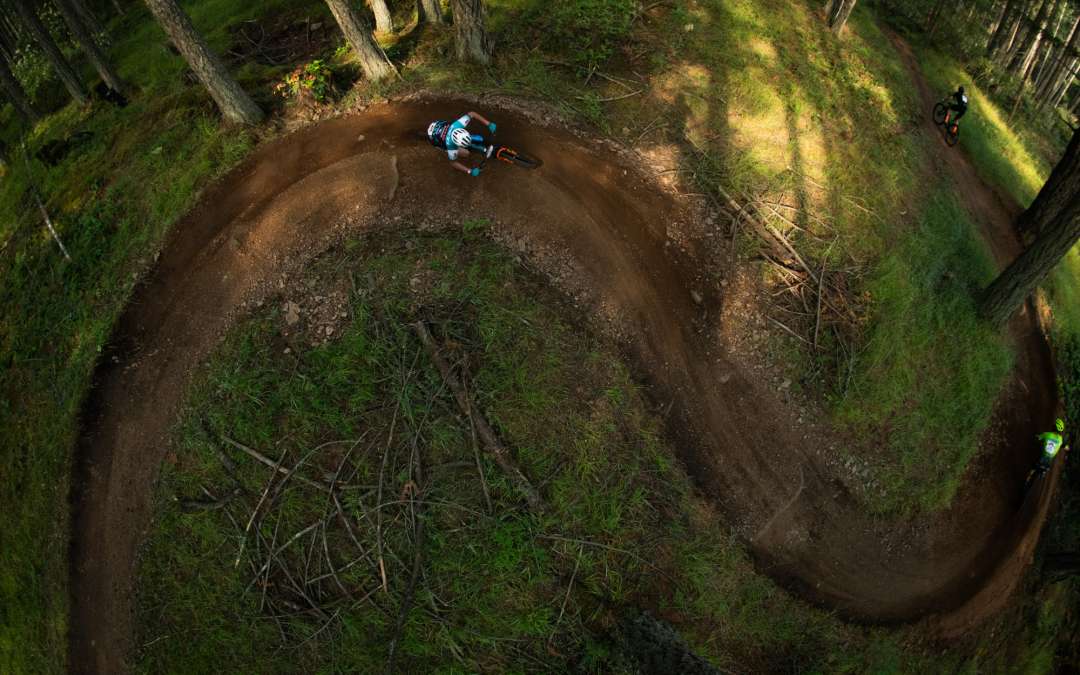 It was business time this morning as elite men and women rolled up to the start line hoping to put Katerina Nash (Team Clif Bar) and Geoff Kabush (Team Yeti-Maxxis) on notice that this year the BCBR story will unfold in a different fashion. One the menu: the incredible two-mountain, tidal wave of fun that is Stage 1, in the beautiful Cowichan Valley. 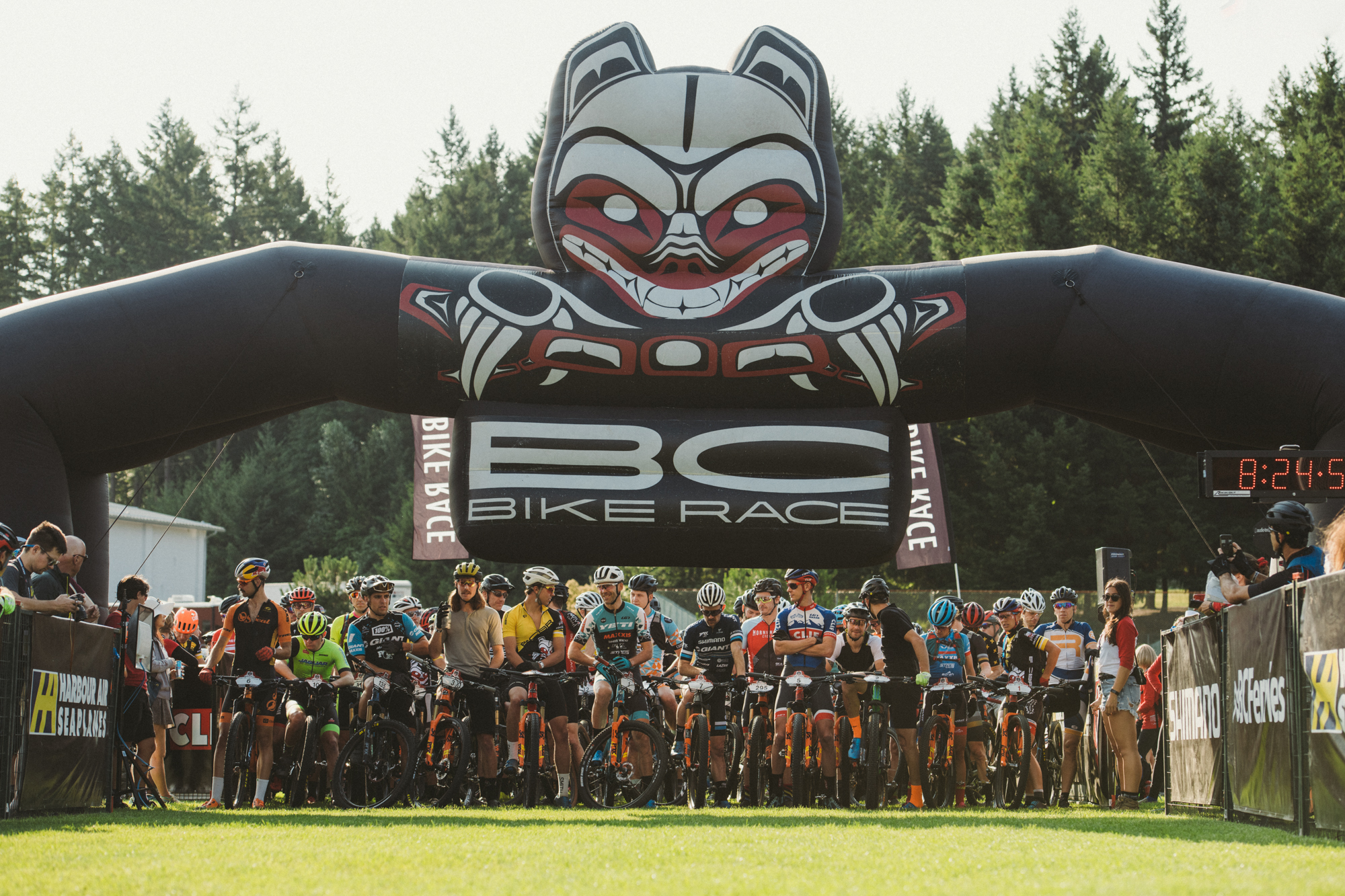 2018 BCBR participants will remember hot temps, sweat in the eyeballs, dust, baby heads and marbles under the tires. This year, you couldn’t have dreamed up a better scenario for Stage 1; light rain and a moderate 20 C on the thermometer made for tack-a-licious trail conditions. Chalk it up to Lucky 13. And racers were indeed lucky as they dove into Grand Traverse, the definition of an uphill flow trail switchbacking through cool Douglas fir forest. 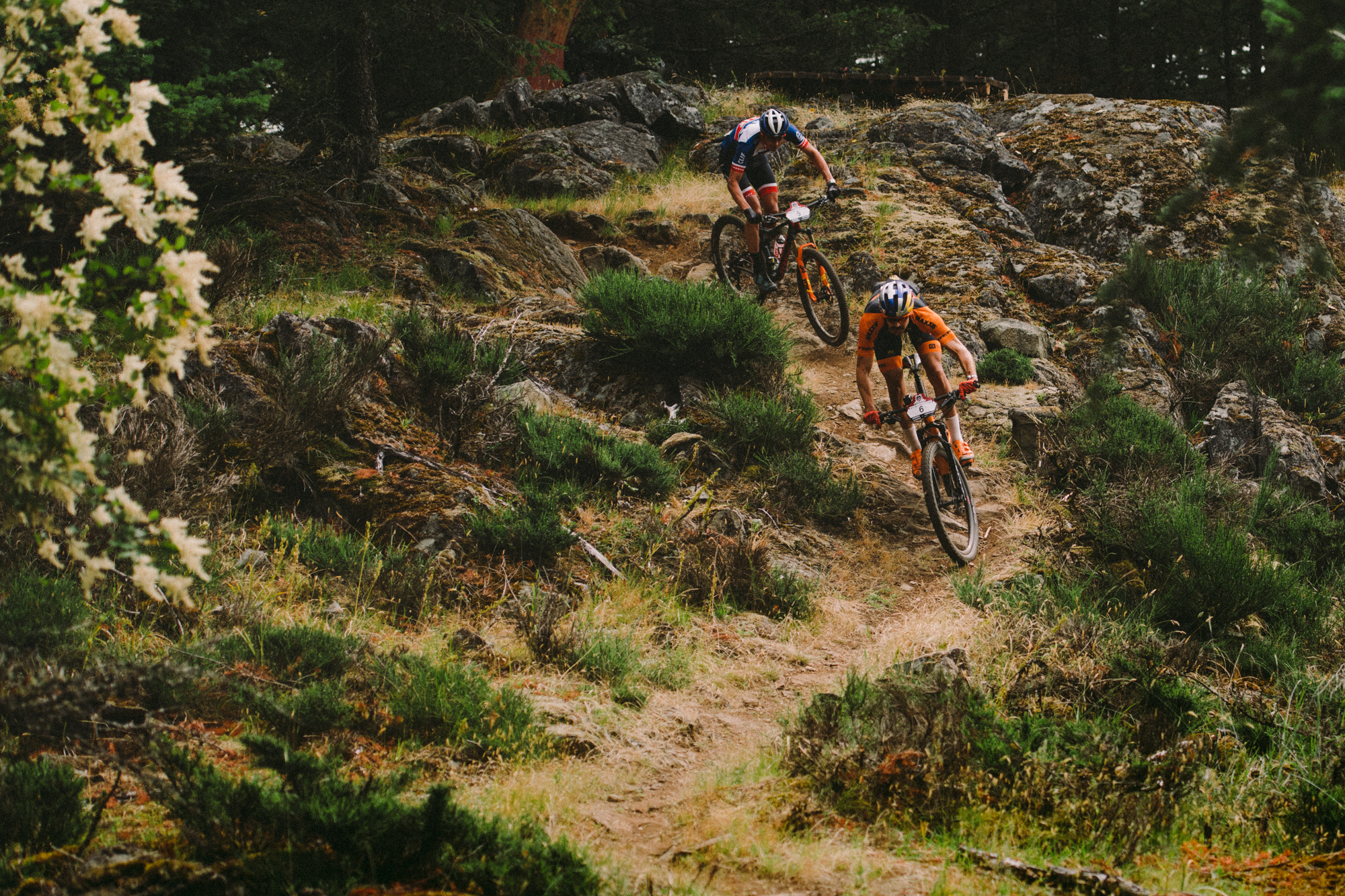 The Prologue had set the stage for some interesting single track battles in the week ahead. Would the experience and power of Kabush prevail over young gun Felix Burke (Rocky Mountain)? In Solo Women, would Nash’s string of BCBR stage wins continue unchallenged? Cyclocross hammerhead Courtenay McFadden (Team Pivot-Maxxis,) Emile Shields (Team ADF) and Jenna Greaser (Rocky Mountain) hoped to change that narrative. 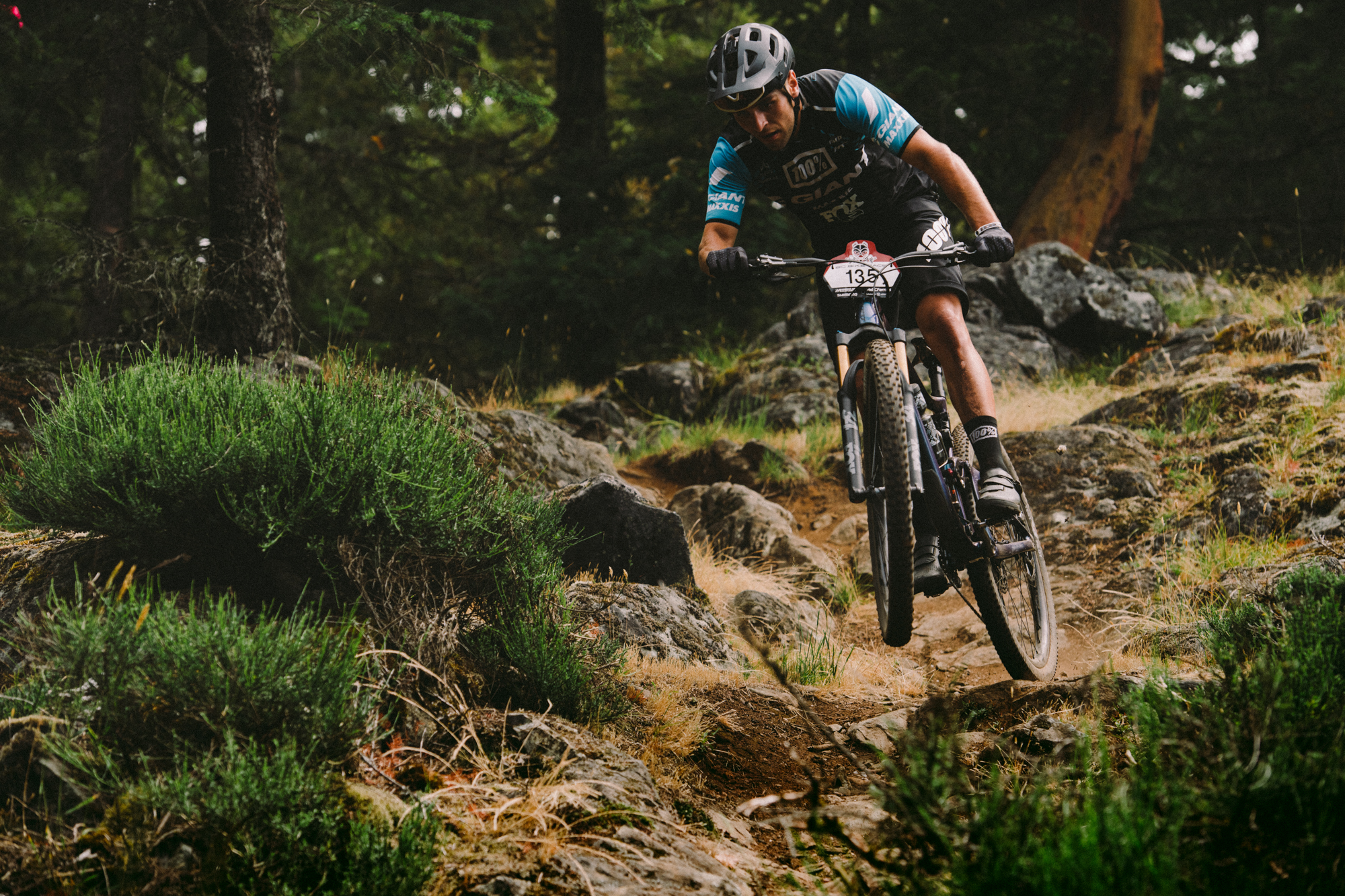 After a lung crushing 40 minute singletrack ascent of Tzouhalem, the lead pack tackled the rock-tech of Rocky Mountain Ridge. When they hit Tzouhalem’s feature trail, the burm and turn deliciousness of Double D, a perky charge by enduro EWS racer, McKay Vezina had him leading, followed closely by Ottawa shredder Davis Ross. But these pretenders to the throne would soon be dispatched. They were being watched closely by Kerry Werner (Team Kona-Maxxis-Shimano,) Burke, and Kabush. Meanwhile, Sam Schultz (Rocky Mountain), biding his time in position 10, was playfully taking advantage of dropper-tunities, making it look easy and throwing it sideways. In Solo Women it was the unstoppable Nash, with hopefuls Greaser and McFadden struggling to keep the pedaling powerhouse in their sightlines.
In Team of 2 (Veterans 80+) Mike Rauch and Simon Blythe (Cahilty Racing) were already having a slug fest with Vancouver Islanders, Normon Thibault and Graeme Martindale (TNA-Frontrunner), which is how the day would end in this category. 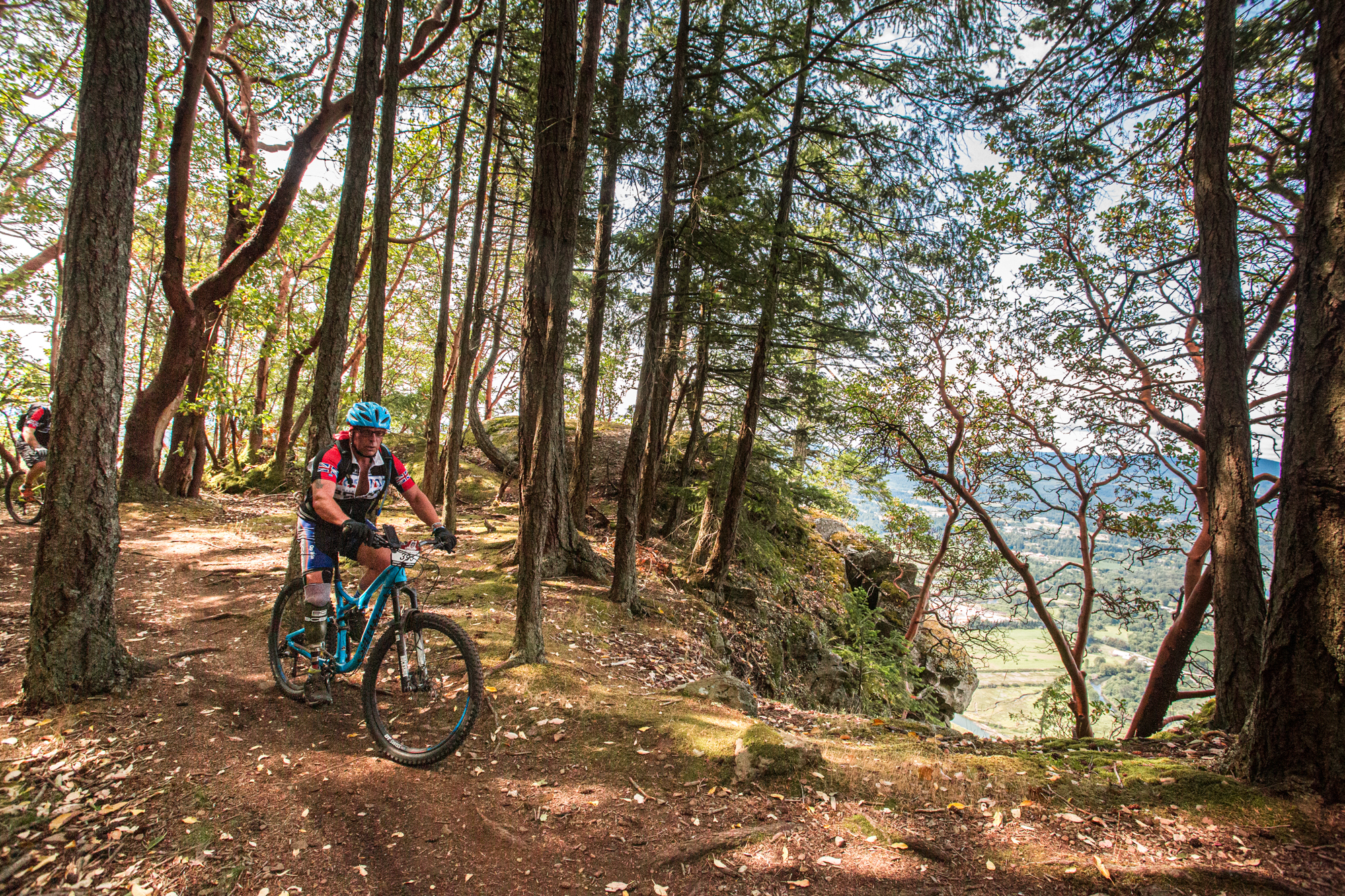 Meanwhile, deep in the mid-pack, ex-British serviceman and lower leg amputee Craig Howorth was still doing battle with the unrelenting Grand Traverse ascent. First-time BCBR racer, Howorth is part of an inspiring group of four veterans who are members of BLESMA, a military charity for limbless veterans. Howorth says he was stoked to sign up after hearing tails from the BCBR trail from fellow BLESMA member Jez Scarratt. He’s also back for another spin as a member of the growing BCBR family who was featured in the BCBR film SEVEN. Forget about E-bikes; Howorth and Scarratt is some tough and inspiring Brits slaying BC singletrack, self-propelled and each with a prosthetic lower leg.

After an untimed spin through the countryside, racers were set to tackle the interminable Lower and Upper Xylem trails that climb to the summit of Maple Mountain. In the proverbial pain cave were Scott Sponheim and teammate Arthur Spring, both from Milwaukee, that hotbed of singletrack riding, on their first ever visit to BC.

You’ve got some big stuff out here.—Scott Sponheim

Understatement of the day. One stage, two mountains means that the rigor of the climb would be paid off with the day’s second feature trail - Maple Syrup. Take some roots, rocks, choose your own adventure manual drops, and some grippy slab-alicious bedrock, then throw in a few punchy, soul crushing climbs when you think the climbing is over and you have Maple Syrup. This hoot fest of a trail has become a destination in itself and gets better with each year as members of the Cowichan Trail Stewardship Society throw dirt, build burms and move rocks in an ongoing fine tuning of the masterpiece. On BCBR race day there’s even an outdoor hard bar, with shots of whiskey and Tim Bit chasers, hosted by the Dirt Divas, a local women’s riding group who were dressed up in fine hoser regalia - hockey gear and mack jackets. 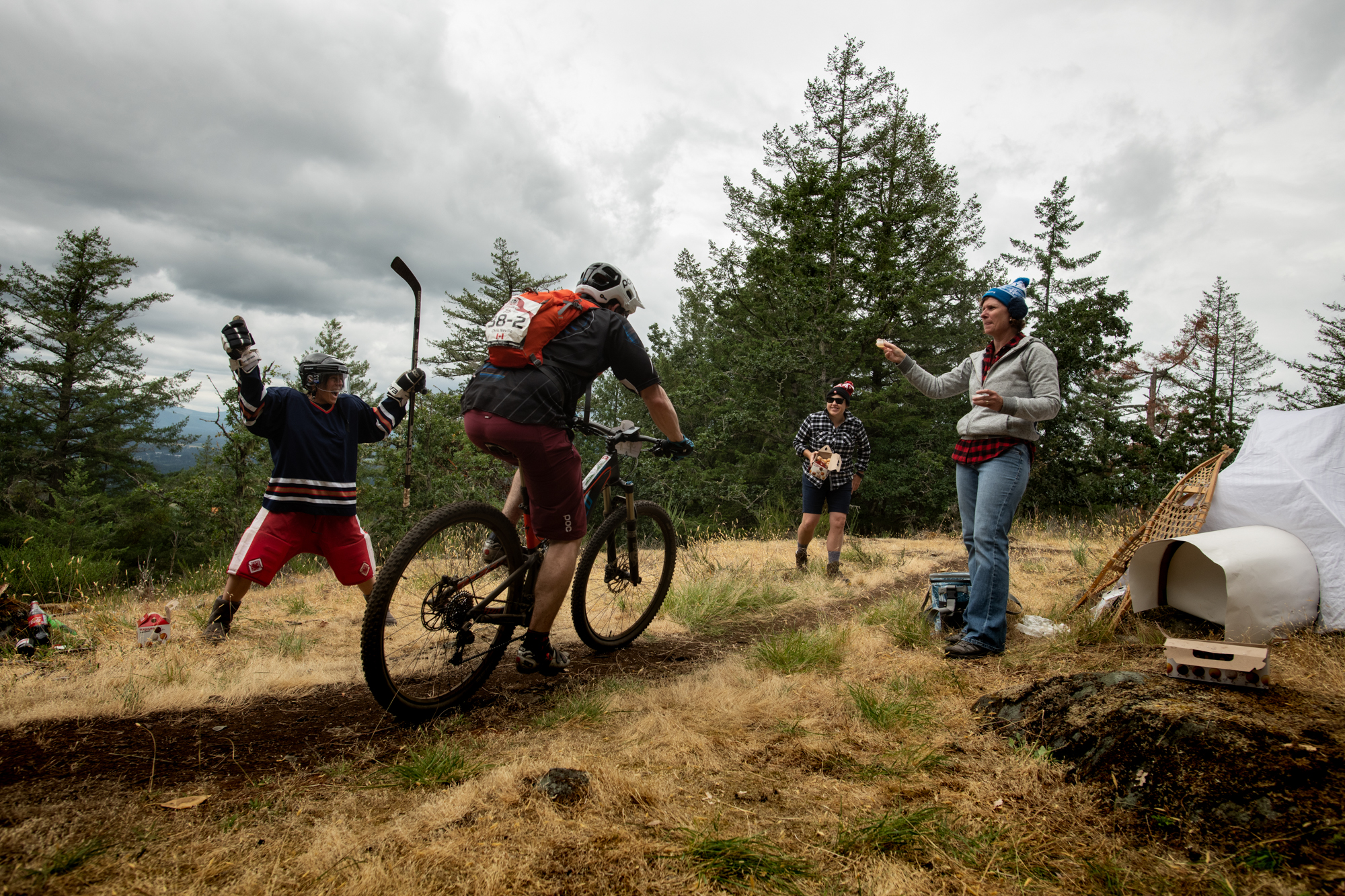 But for the elite BCBR athletes, there was no time for donuts and debilitating drinks. It was game on. After a full serving of Maple Syrup, a natural order had resumed in Solo Men when they roared down the newly minted Phloem (you guessed it - this trail is flow defined,) Burke leading followed by Kabush and Warner, with Schultz in 4th place and working hard to keep pace. An exciting day of racing would end in a three-way tie for first between Kabush, Burke and Warner in 1:52:24, Kabush proving once again that salty old dogs can be hard put down. 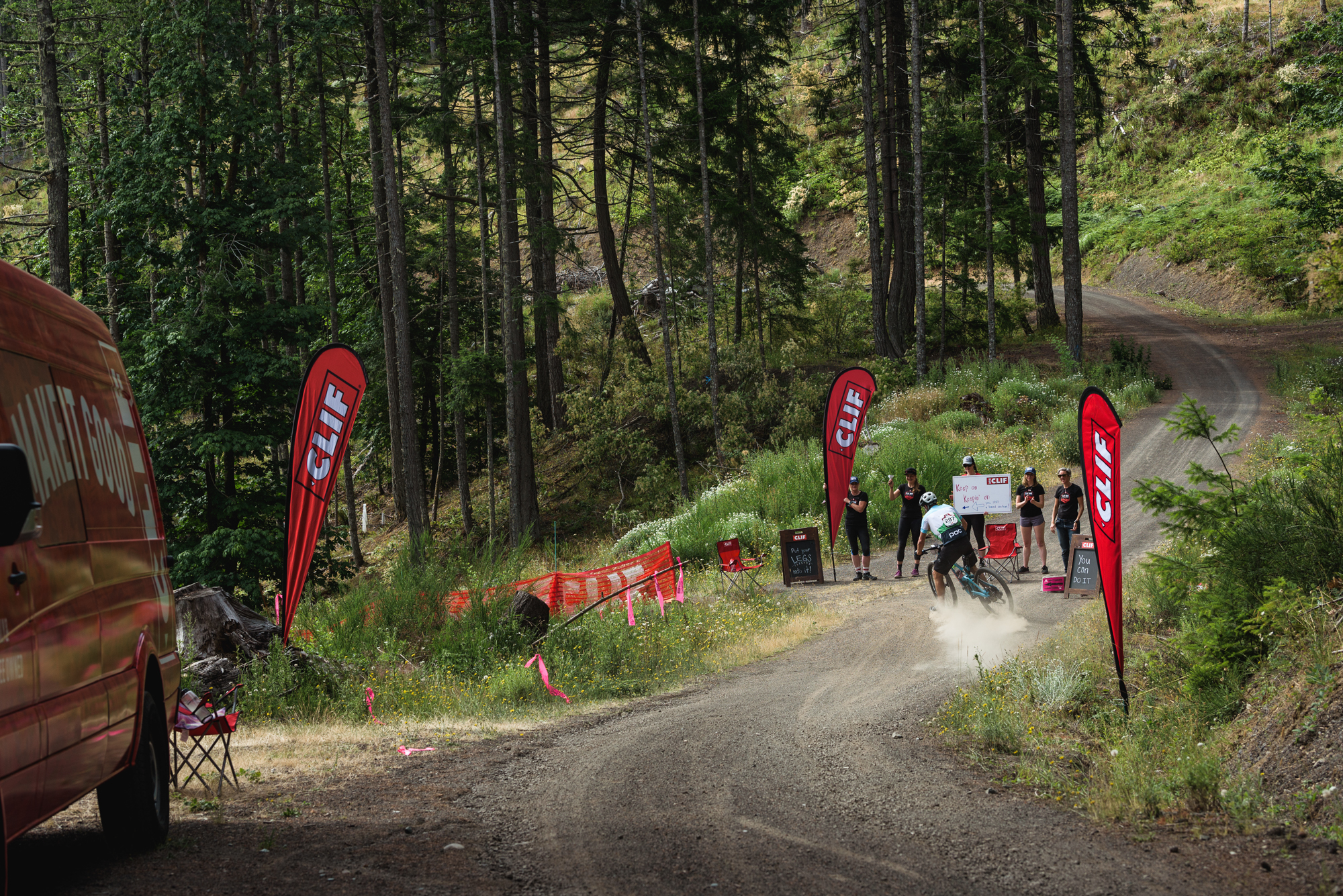 And if there’s one thing Nash has proved at BCBR, she’s more than comfortable in the company of men. Finishing 21st overall, the Clif Bar athlete dropped the hammer on her closest competitors, putting an incredible 5 minutes on 2nd place finisher McFadden, who was trailed by Greaser.

In Solo Veteran Mens, New Zealander Brad Clarke won comfortably, while in Solo Veteran Womens, it was fellow Kiwi, Mandy Hancock claiming first with a 20-minute Mount Everest of a lead on the second place finisher. It appears that riders from this little country in the Southern Hemisphere are in BC to make a statement.

Tomorrow, it’s Cumberland, the first of two stages to be held in this old Vancouver Island coal mining town where mountain biking and beer form the core of a religion that is all their own. There are more than 120 km of trail around Cumberland and the network continues to grow. BCBR participants will sink their knobby tires into an embarrassment of singletrack riches, including Further Burger, Bear Buns and Vanilla. 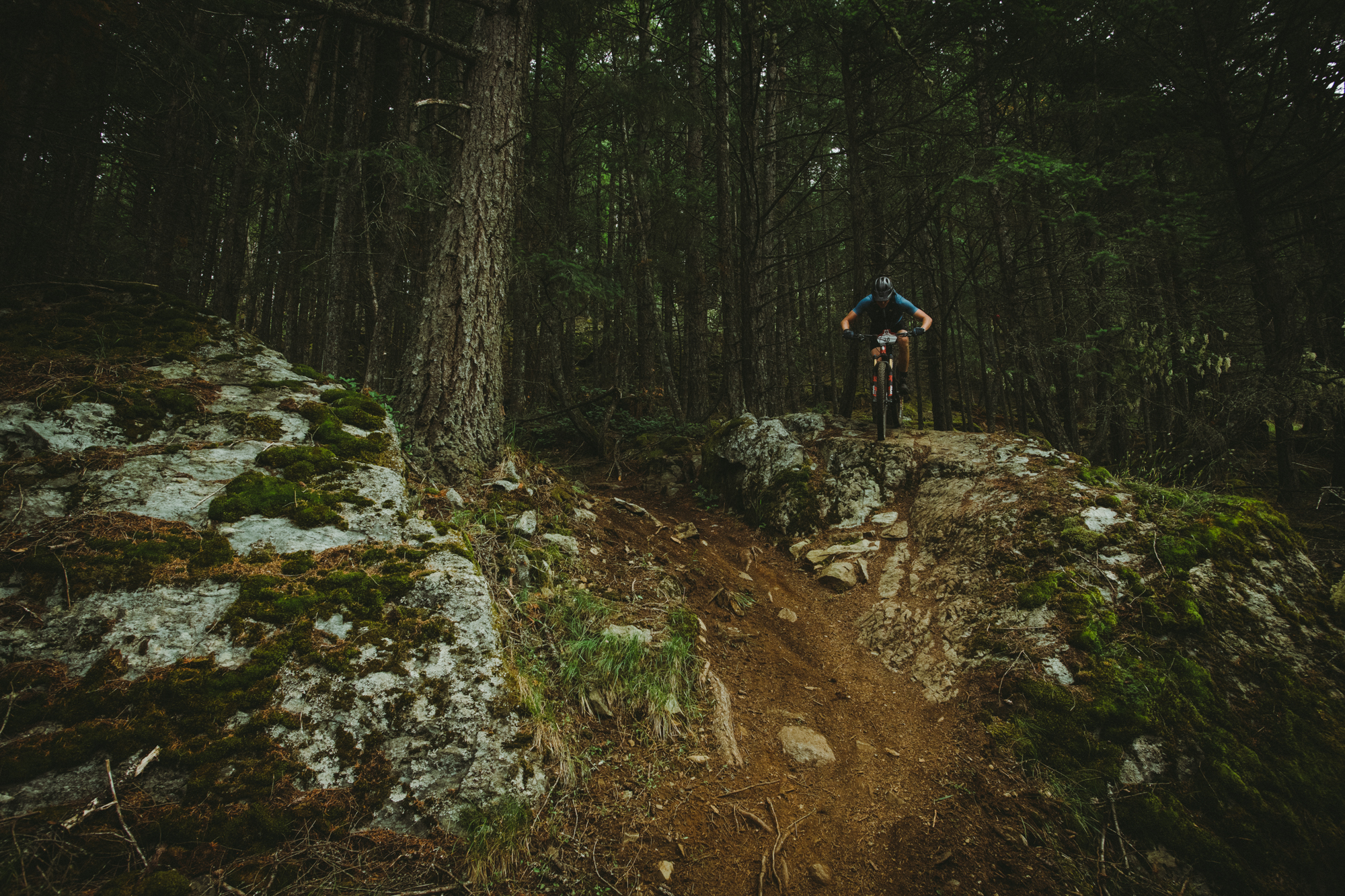