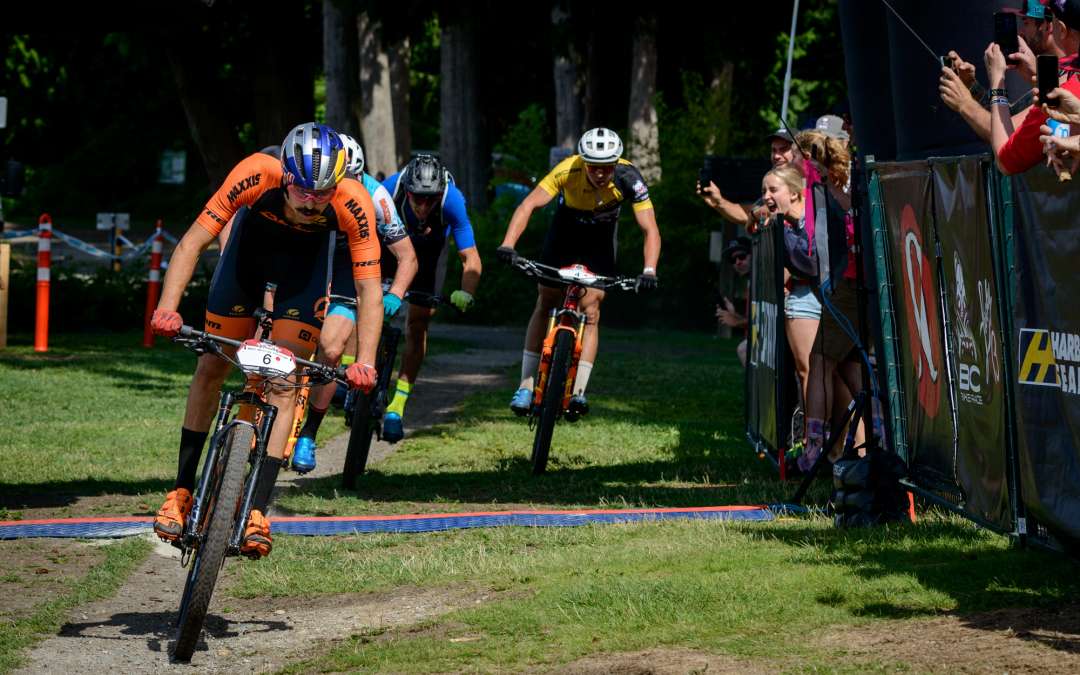 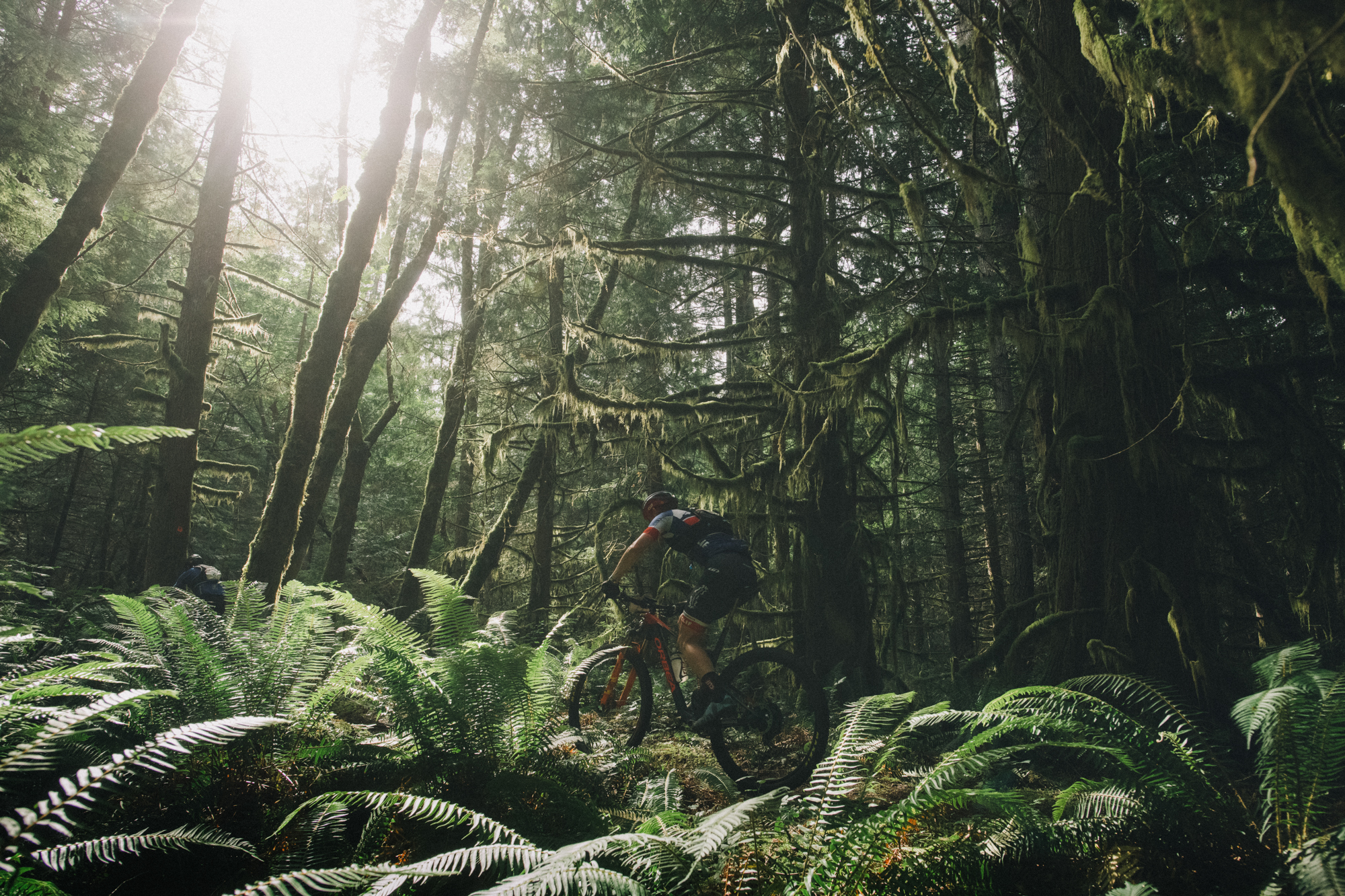 The heat is intensifying. Burke maintains a 3 second lead on Kabush but he’s far from comfortable.

Red sky at night, mountain biker’s delight. Yesterday racers snapped Insta pix of a gorgeous evening as the sun set over the Strait of Georgia. Spirits were high, buoyed by a dry forecast. Call it the calm before the rainstorm that was forecasted for Wednesday. However Today presented ideal conditions for tackling Stage 4, Powell River’s pedal-intensive 50 km course. The road warriors were  going to be happy. For breakfast, they would gorge on nearly 10-plus km of road before diving into Stage 4’s first section of sustained singletrack - Suicide Creek Trail, a dreamy 8-km long XC masterpiece that slices a 8km-long horseshoe through electric green forest. A tad lower on the technical scale, this stage threatened to shake things up among the men at the top and perhaps play into the hands of a Paysen McElveen (Team Orange Seal – Trek,) a Benjamin Sontag (Team Clif Bar) or a Michael Van den Ham (Garneau – Easton Cycling,) all three of them monsters who can eat asphalt and gravel for breakfast, lunch and dinner, if they’re hungry enough. 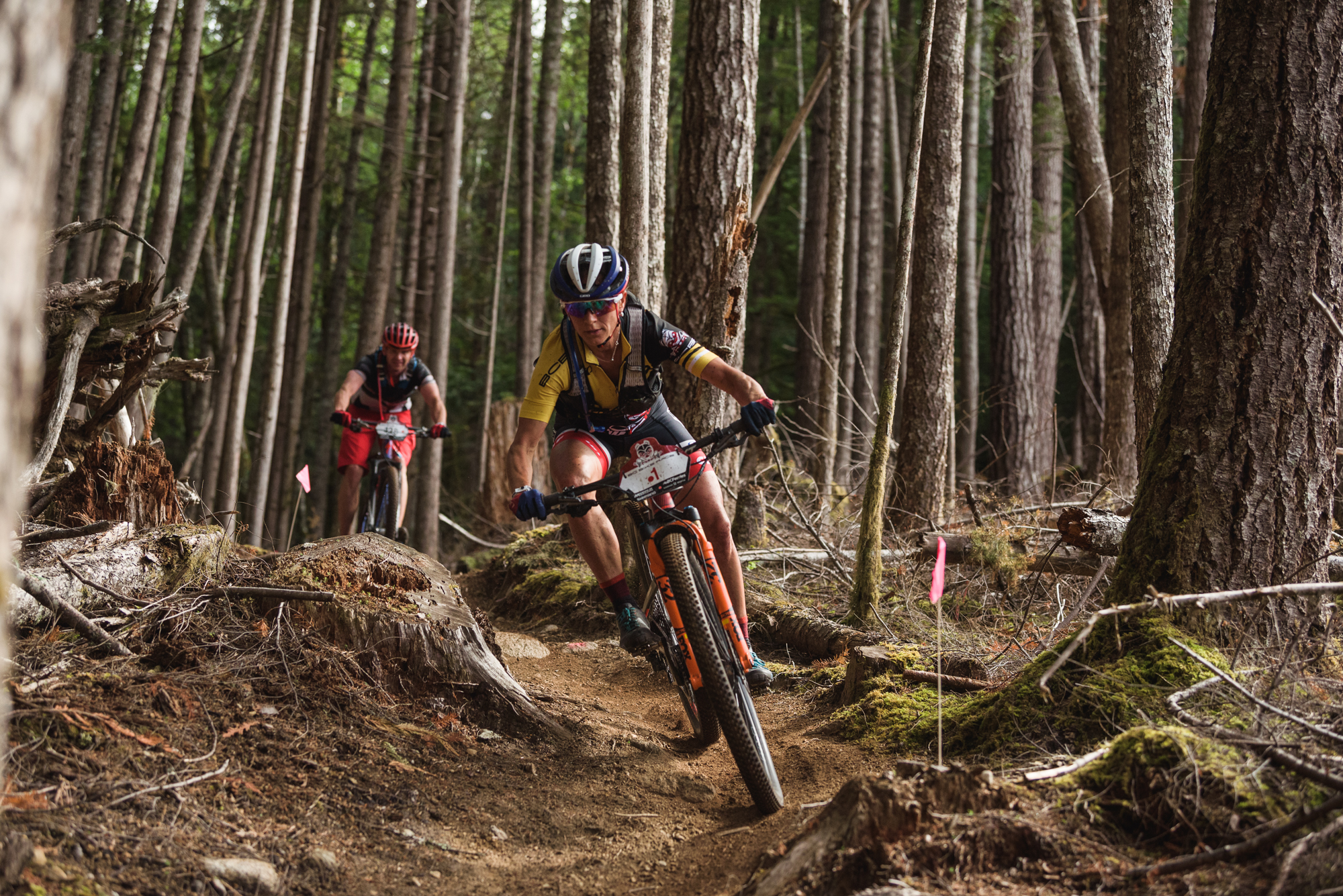 In Solo Women, Katerina Nash (Team Clif Bar) was proving equally punishing on the climbs as she is on technical descents. So far she was leaving little room for doubt, and less room for attacks.

“I’ve been asking myself that question for the past two days,” said Bellingham-based Courtenay McFadden (Team Pivot-Maxxis,) who enjoyed her best stages in wet and greasy Cumberland and is hungry to chip away at Nash’s three-minute plus lead. “I’m really hoping for a stage win.” 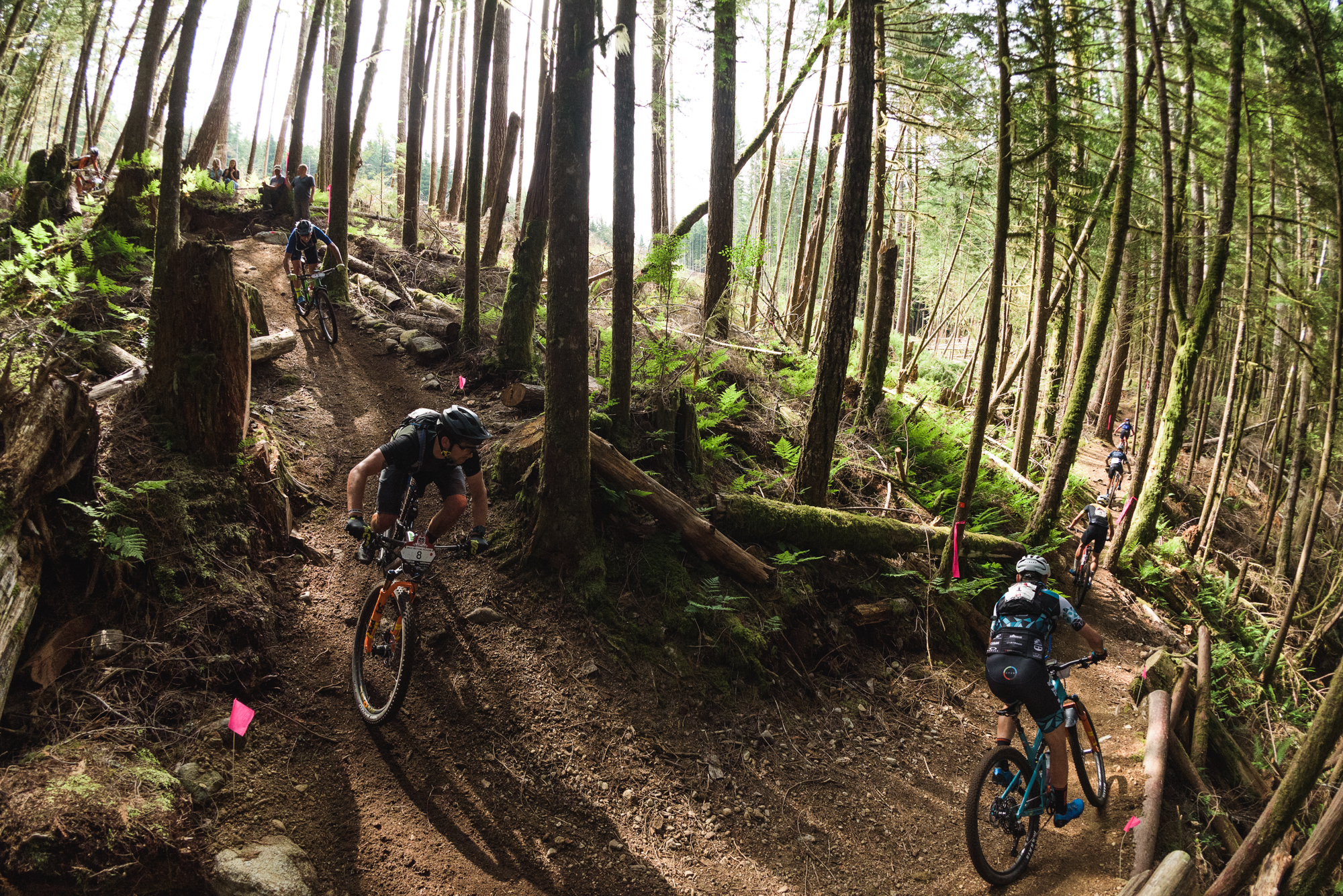 And would the full-on, punch-for-punch, singletrack battle underway in Teams of 2 (Veteran 80+) between Mike Rauch and Simon Blythe (Cahilty Racing) and Graeme Martindale and Norm Thibault (TNA-Frontrunners) continue unabated in the ring of Powell River dirt?

“The problem is they’re really nice guys,” Martindale said, about their nemesis.

Sometimes hatred does fuel the fire of competition. Though this a friendly rivalry, once out on the trail, there’s little time for pleasantries. Marintdale and Thibault were hoping to take a  chomp out of the leader’s more than 5-minute overall lead. 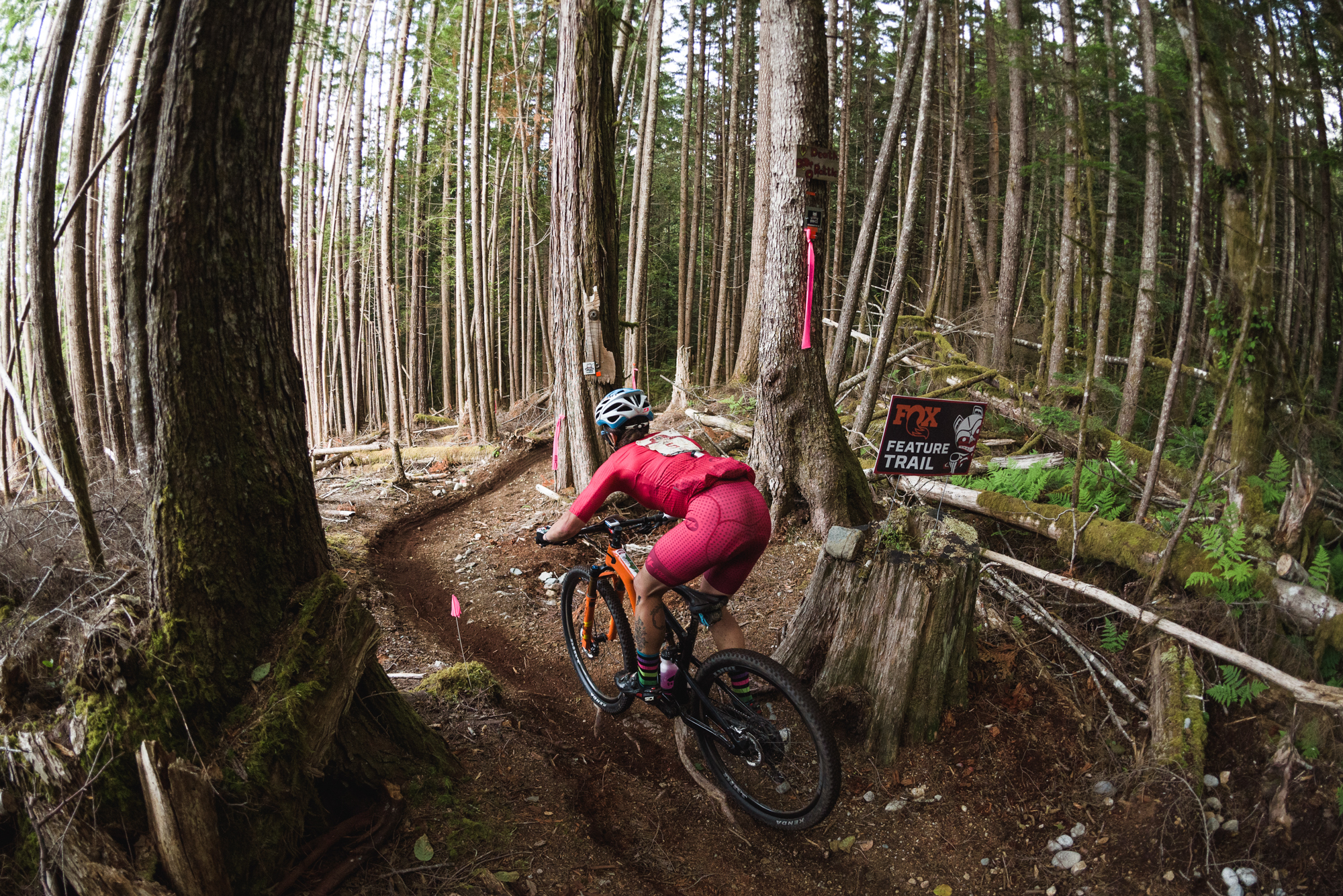 Stage 4’s start line on picturesque Willingdon Beach was within staggering distance of the racers’ tents, and at 9 am it was on. Fifty minutes into the stage, the leaders were flowing Suicide Creek Trail, staying focused on a thread of dirt with no shortage of roots and handlebar clipping tree-squeezes. The pack was tight, with some less familiar faces in the mix, like Belgium’s Kristof Schrauwen and tenacious pit bulls Chad Black and McKay Vezina who have made a habit of infiltrating the leaders early in stages throughout the week.  Yellow jersey holder Geoff Kabush (Team Yeti-Maxxis) was in 5th spot, calm, cool and collected. The pace looked comfortable, almost relaxed, with nobody yet making a move to attack.

Nash was holding down a top-20 overall position, with a cautiously comfortable 2-minute lead on McFadden, who stacked into root and twisted her handlebars. Uninjured, she made a rapid pit stop at the Shimano tent/aid station and  was back in the saddle, with Jena Greaser (Rocky Mountain) spilling out of Suicide Creek Trail 300 a mere metres back and with the eye of the tiger. McFadden quickly dropped the hammer on the road climb toward Aloha Trail hoping to recover lost seconds. 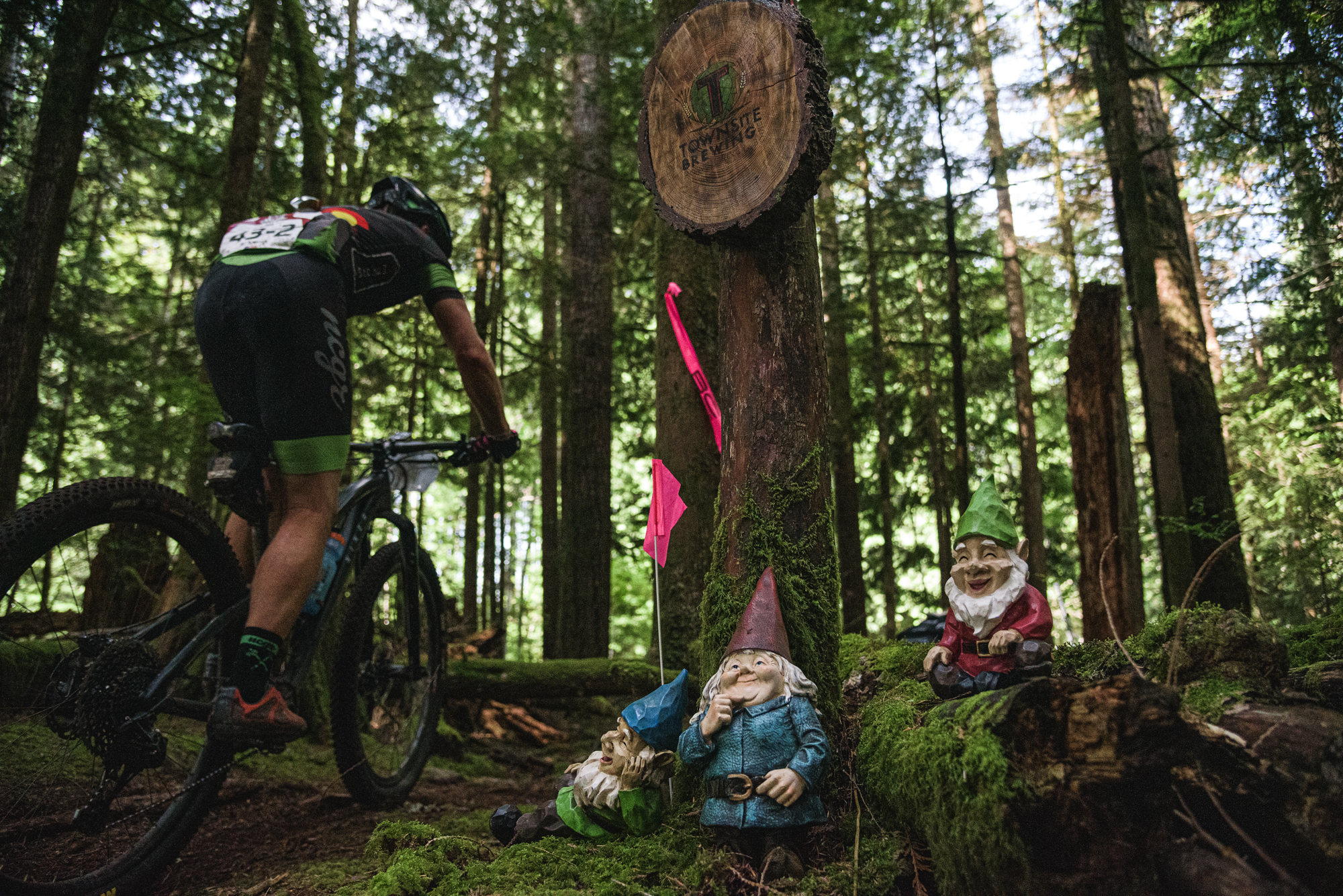 Deep in the pack, Craig David Preece was channeling the strength of his bib number, 99, digits that are sacred to Canadian hockey fans.  He was struggling to overcome a nagging chest cold, but showing the kind of inspiring grit he and his fellow British military amputees have brought to BCBR all week.

Among the leaders it remained light and tight as they carved down the burms and rolls of Death Rattle. Fireworks started flying at around the 40 km mark when Felix Burke (Rocky Mountain) started attacking. But the competition had an answer, and after the final trail and road descent back to seaside, it was McElveen crossing the finish line first, a second in front of Kabush, and Kerry Werner (Team Kona-Maxxis-Shimano.)

The heat is intensifying. Burke maintains a 3 second lead on Kabush but he’s far from comfortable. “I’m hoping it doesn’t come down to the last day in Squamish. That would be stressful,” said the Rocky Mountain upstart. “My ideal would be a punchy climb followed by a technical descent that I could carry to the finish line.”

Sounds like Burke is describing Squamish. But there’s tomorrow to contend with first - the Earl’s Cove to Sechelt point-to-point .

At the end of the day in Solo Women, familiar faces ascended the podium with Nash in top spot followed by McFadden in 2nd, 4 minutes back,  and 3rd place finisher Jena Greaser (Rocky Mountain.) 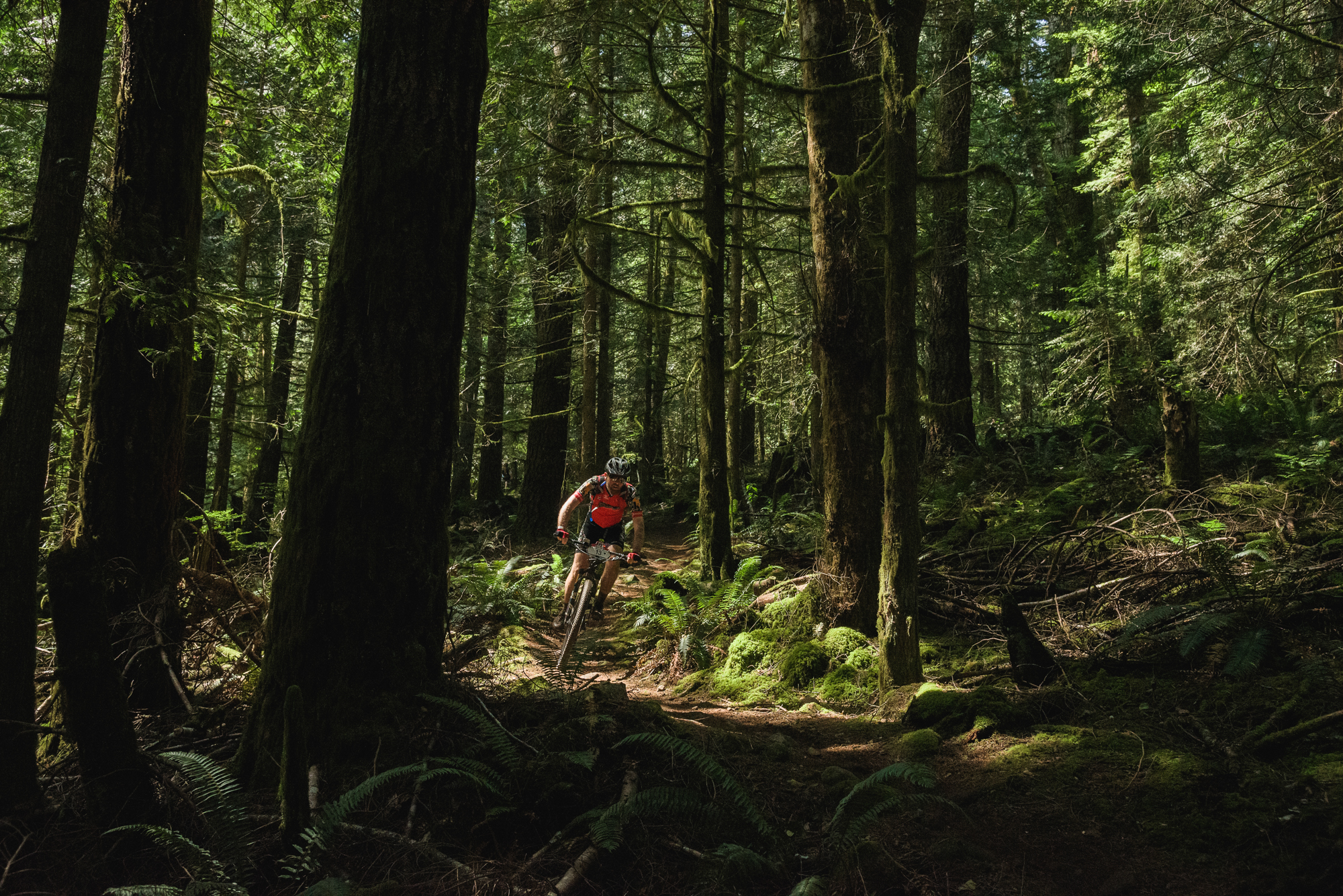 Some people fear rain like they fear Satan. But McFadden is looking forward to tomorrow’s soggy forecast

In the hotly contested Teams of 2 (Veteran 80+,) this stage proved that North Van’s Cahilty Racing combo of Rauch and Blythe have no reason to celebrate early; a mechanical put them a minute back of rivals Martindale and Thibault at the finish line. This battle is far from over.

If it wasn’t for Team of 2 (Open Men) repeat stage winners, Belgians Jef de Coster and Cedric Parys, Europeans would be absent from podiums at BCBR Lucky 13. Perhaps it’s time to prescribe a steady diet of BC tech-gnar to Euro mountain bikers. Or perhaps they should tear a page from Parys and de Coster’s book, guys who sharpen their tech skills in the Ardennes, a rugged forested region along the Belgium-France border. And they are also more than at home on West Coast roots and rocks, having both competed solo in past BCBRs.

“It’s incredible. The whole BCBR experience is a big adventure,” Parys said, while relaxing back at Willingdon Beach.

These boys appear destined to head home to Europe with a trunk full of metal assuming their winning streak continues.

Tomorrow racers will wake to the squawk of the chicken. They’ll fortify with breakfast then board buses for the shuttle to the Saltery Bay ferry terminal. A shirt crossing will deliver them to the sea level start line of Stage 5. This one’s hefty - 1600 vertical metres of climbing packed into a 58 km  course packed full of sinuous, Sunshine Coast singletrack. 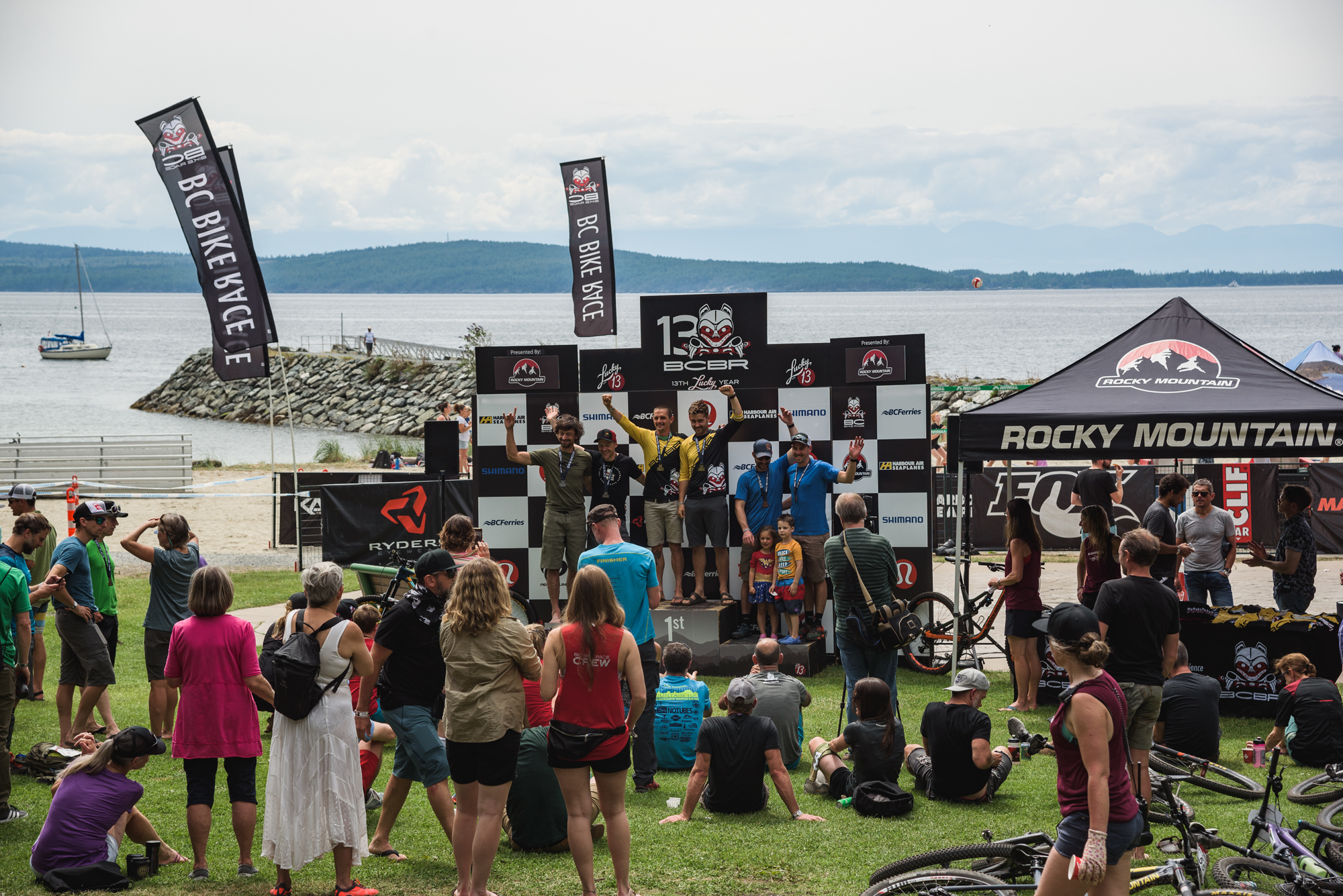 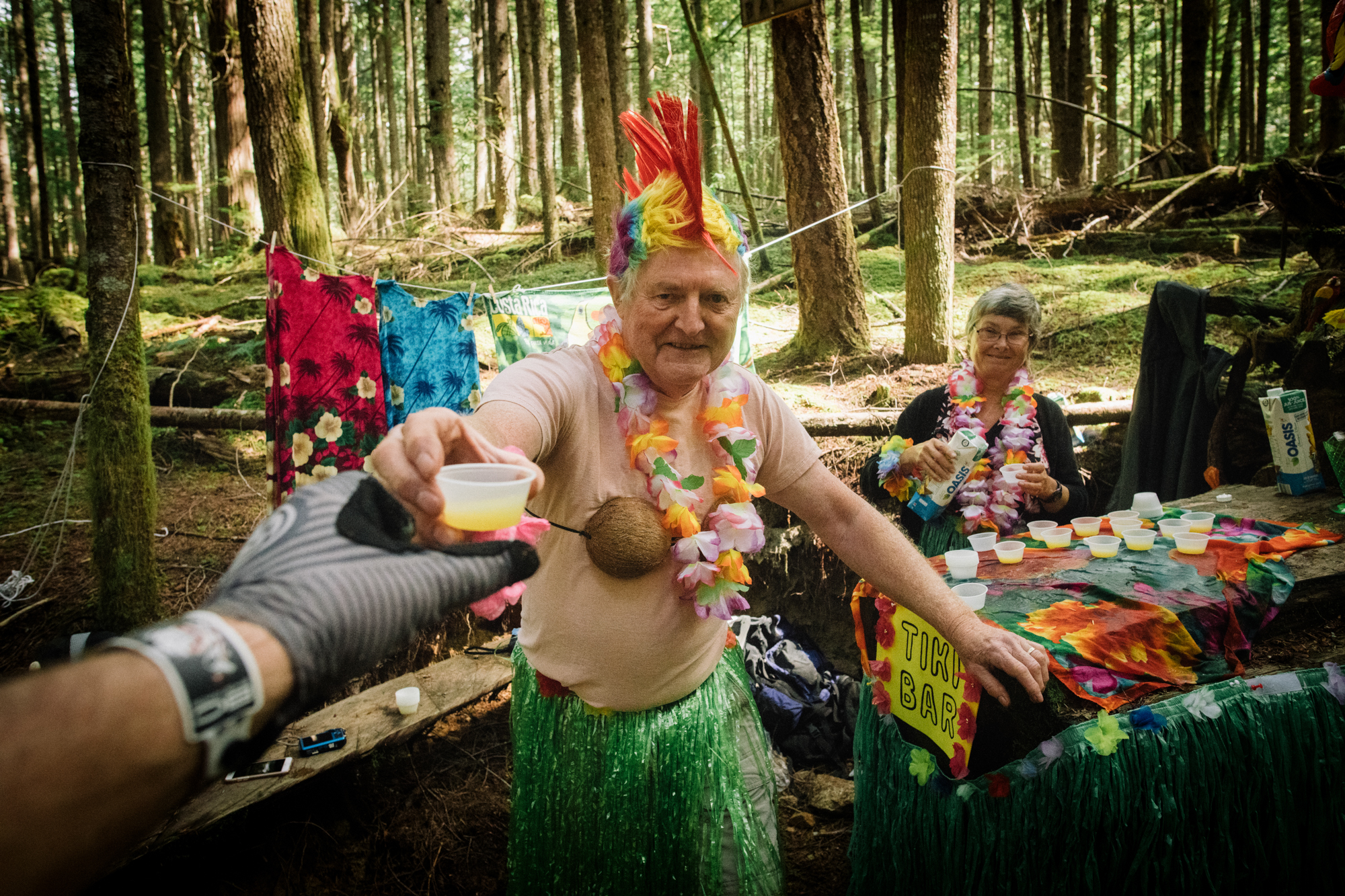