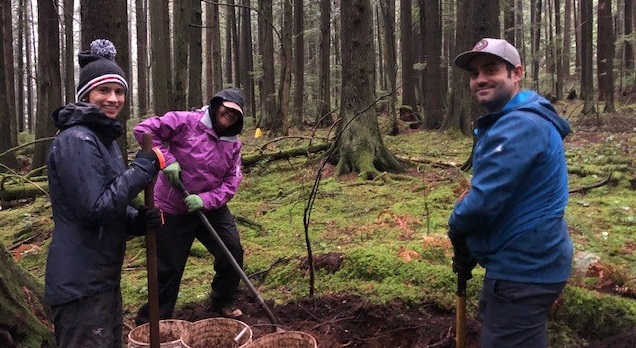 Evidence suggests that the BC Bike Race team like spending time together.  Despite the cold, soggy conditions, a hardy group layered up and met for a morning of trail work on the Richard Juryn trail last Saturday.  The Richard Juryn trail was used for our Prologue course in 2019 and is a local favourite.

Under the direction of Pat Podolski of the NSMBA (North Shore Mountain Biking Association) we worked on a few of the corners on the lower section of the trail.  Our mandate was to bolster a couple of the eroded berms, repair general erosion on the trail and build some grade reversals to direct water flow away from the trail.  The latter being key at this time of year so we can keep pedaling through the rain forest all winter long. 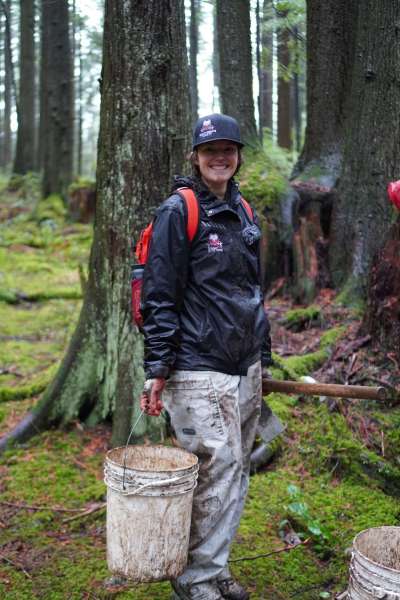 Buckets upon buckets of dirt had to be hauled over to the trail. It was a muddy mess in the rain but it appears that playing in the mud never loses its appeal, no matter how old you are.  The work was challenging but so rewarding to see the result of our labours.

As with all trail work, the last order of work was to leave the forest as pristine as we found it.  We diligently repaired the holes we had dug and replaced the moss where it had been moved.  Only after we got the nod from Pat that the clean up was complete, were we able to head back down the trail.  It’s hard not to feel like one of the seven dwarfs with a shovel or a pick over your shoulder and a bucket in hand heading out after some trail work.

After changing into dry clothes, we reconvened at a local pub for some lunch and a few beers. Is there a better way to wrap a productive morning of hard work than enjoying a beer with friends?