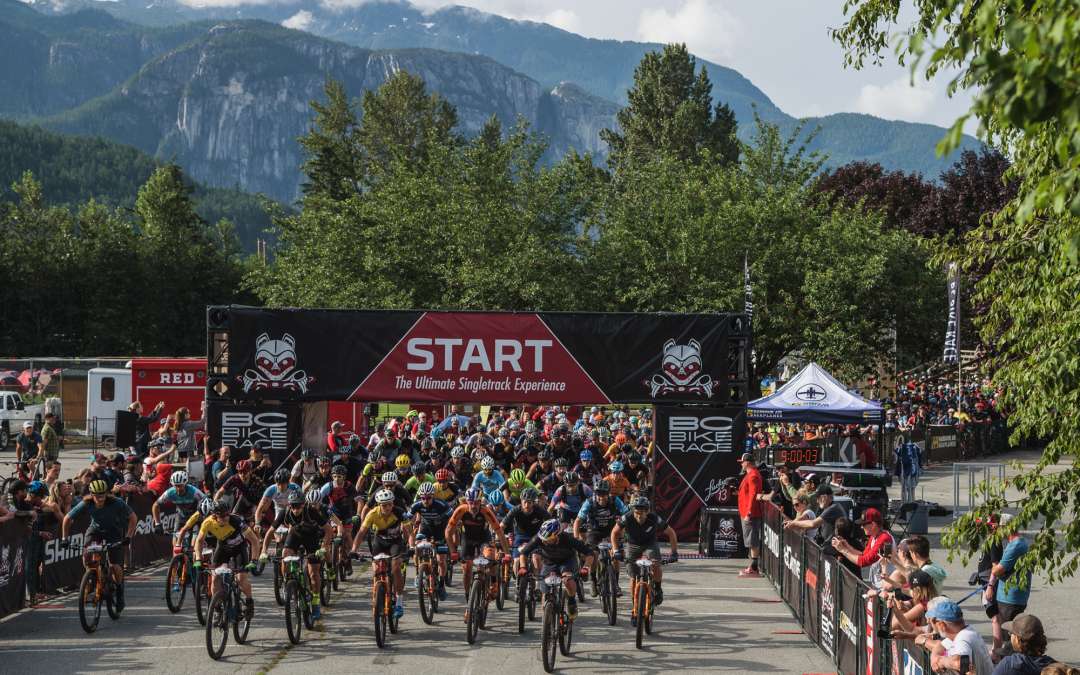 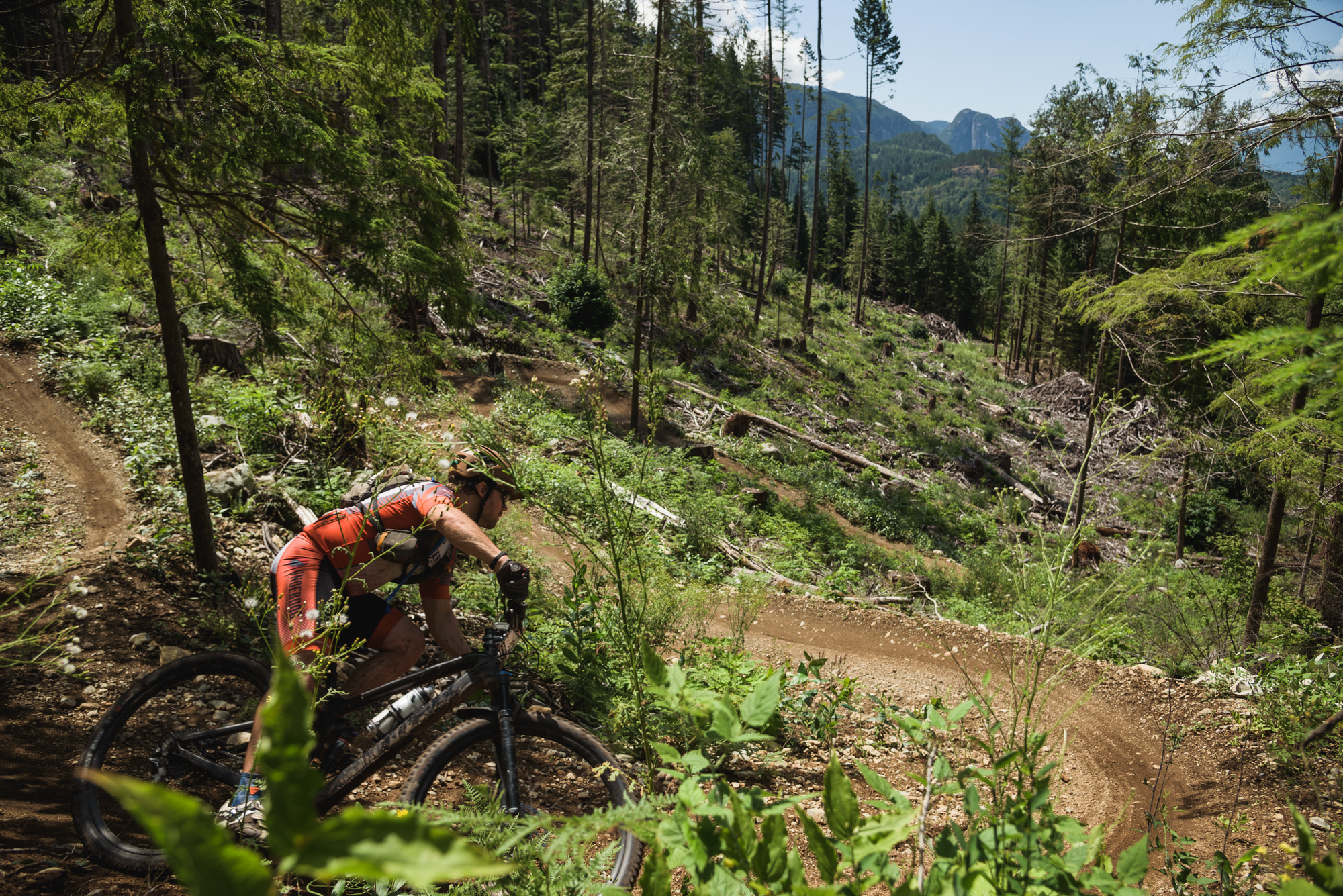 Sunny skies broke over Squamish for the first time in three days along the BC coast. It was shaping up to be a perfect finale to a week of incredible racing. BCBR started with a quick tune-up Prologue on Vancouver’s North Shore. This lightning fast mini-stage seeded racers for the feast of single-track stage racing that would follow. From the North Shore, they traveled to North Cowichan on Vancouver Island for a two-mountain, one-stage opening day on some beautiful Mount Tzouhalem and Maple Mountain trail. Then it was off to the grit of Cumberland’s hand built singletrack, slick and spicy from some overnight rain that would raise the pucker factor. After two stages on the Cumberland network, it was over to the Sunshine Coast. Light rain would keep the three Sunshine Coast stages, with stunning trails winding through old growth forest, in super tack conditions. Today it was Squamish and its seriously sick stack of singletrack -the venue for stage 7. 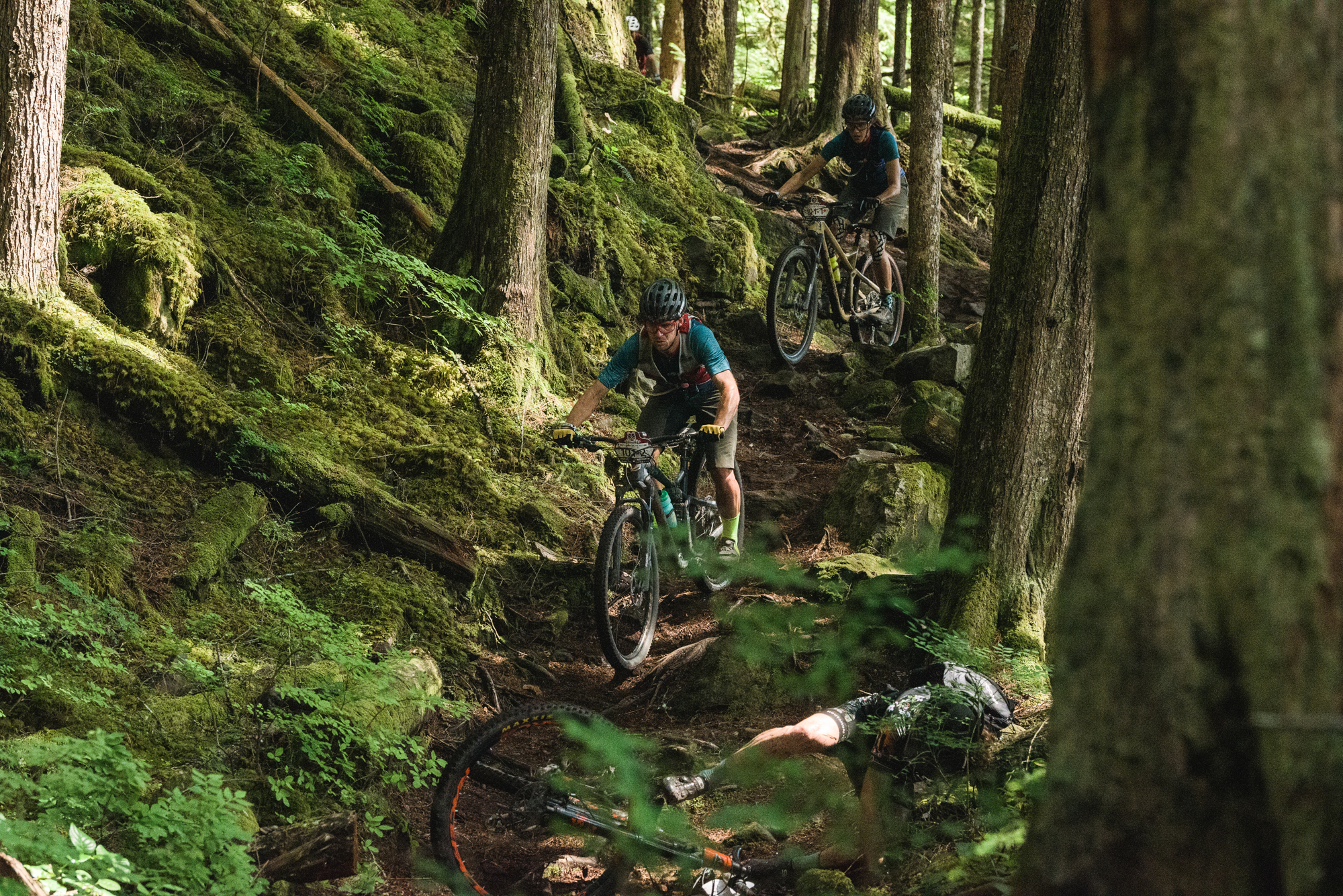 Yesterday there was drama on course. Crashes and some interesting shuffling of personalities on the podium at the top made for an interesting day. Felix Burke (Rocky Mountain) dropped the hammer mid-stage 6 and continued to push the pace, rolling across the Langdale finish line first and building up a 3 min-plus cumulative lead on his weeklong rival Geoff Kabush (Yeti-Maxxis.) Kabush was kept off the podium that day, while Benjamin Sontag (Clif Bar) suffered a crash on the final descent that left him with a broken arm and out of the final stage of BCBR 2019. Jena Greaser (Rocky Mountain) also ate some dirt on Hwy 102, leaving her rattled and making room for Spaniard Ada Xinxo to steal a 3rd place, Stage 6 podium finish in Open Women. 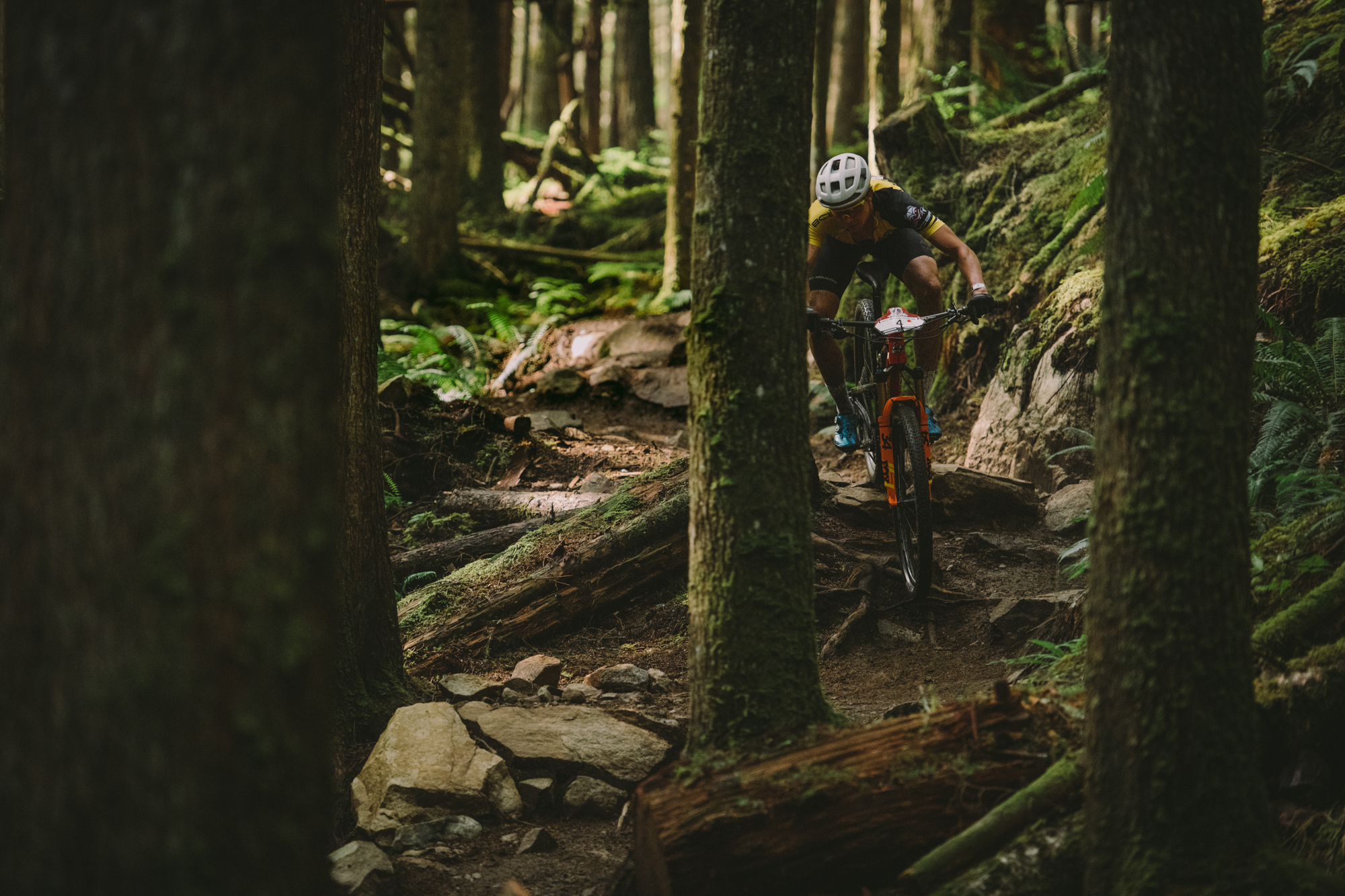 Everybody, including Felix Burke, was wondering what Kabush would have in store for the final day in Squamish. This showdown would be played out on his adopted home trails that he knows like the lines on the back of his hand. Did the young gun push too hard yesterday, leaving him gassed for when he would need it most on the final stage? 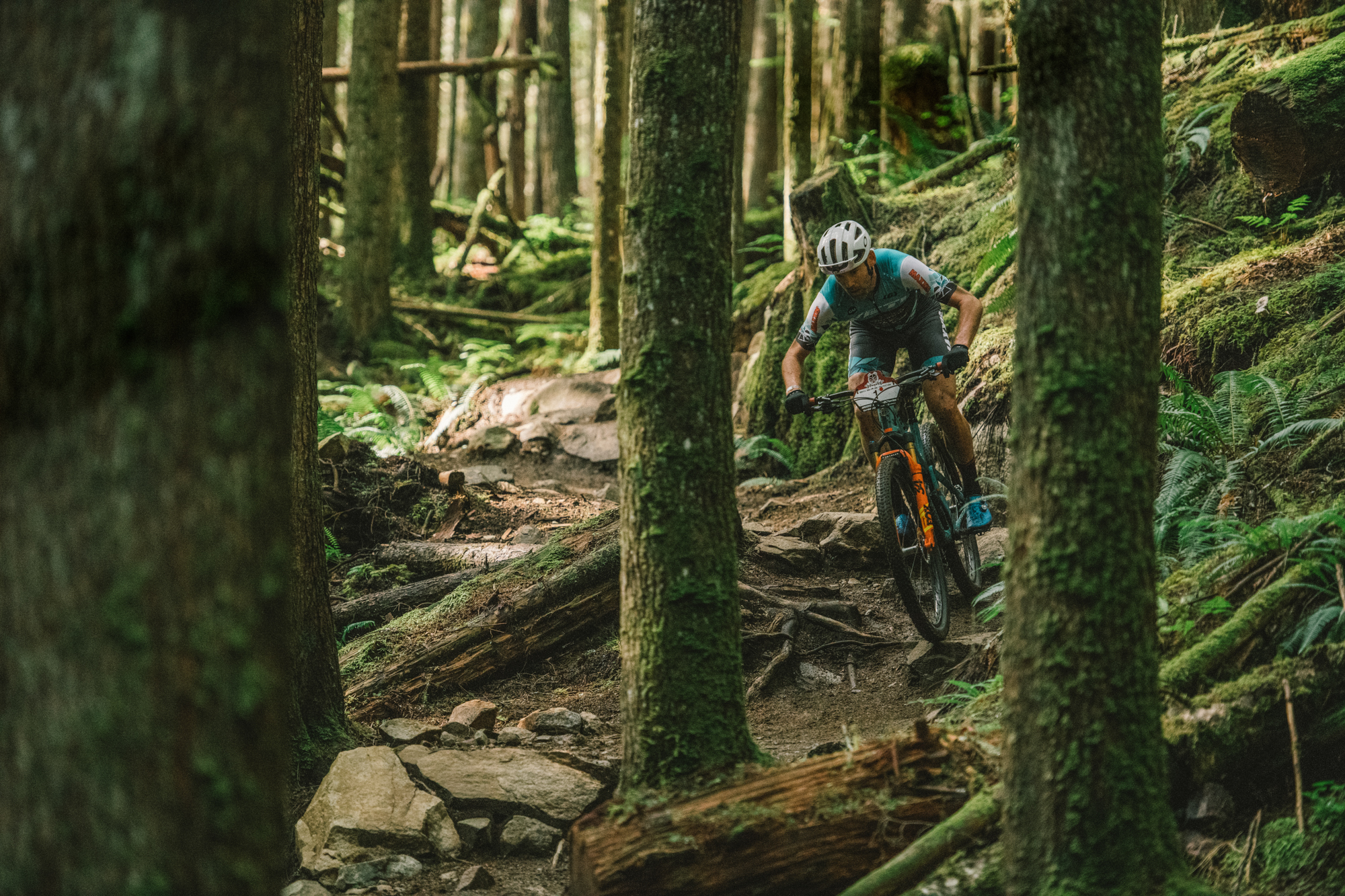 “It was getting in my head a little and I was nervous this morning,” Burke said. “But I was confident in my abilities.”

If Burke was nervous it didn’t show when he hit the dirt for Stage 7.

BCBR crews were already setting up the post race, day 7 beer gardens, when racers left the finish line at 9 a.m. The first heat was hungry. Burke would make moves early. On the first sustained singletrack climb, 50 Shades of Grey, the Quebec-born shredder started to push the pace. Kabush was clinging to his wheel at first, but Burke started to grow a gap.

” I basically started breaking away on 50 Shades of Grey,” Burke said.

On the road climb to the Half Nelson trailhead, Kabush watched as Burke faded from view in front of him. By the time the leaders dropped into Squamish’s signature superflow-pumptrack down trail, Burke was 40 seconds ahead of Kabush and in control. There was a massive gap before the chase group arrived, led Stephen Hyde (Cannondale) and followed by Kerry Werner (7mesh-Clif Bar) and Michael van den Ham (Garneau-Easton Cycling,) Canadian national cyclo cross champion. 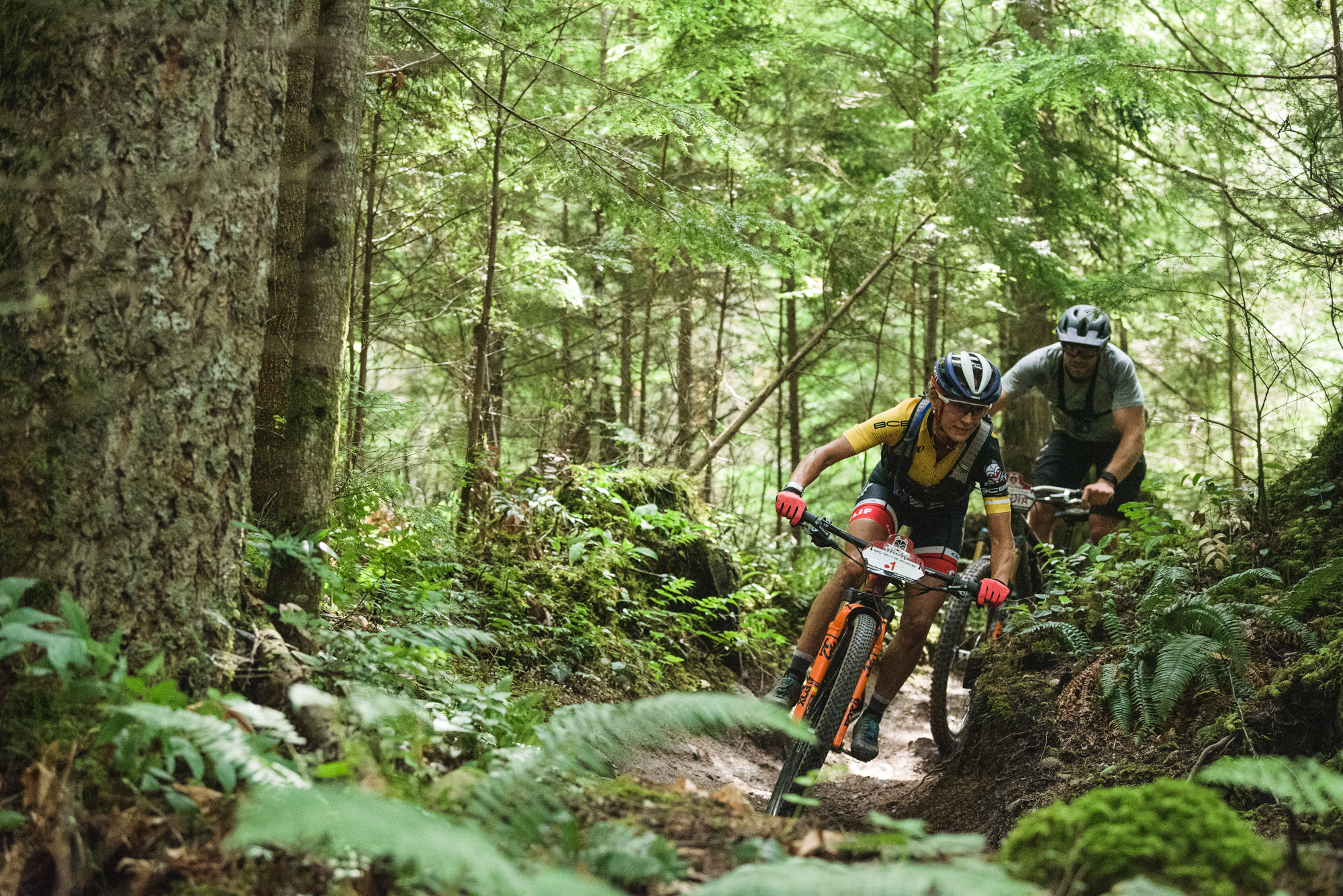 It would remain lonely at the top of this stage for Burke. When he exited the day’s feature trail Pseudo Tsuga onto the Garibaldi FSR, his lead had grown. By the time he attacked Far Side, in the later 10 km of the stage, he was more than a minute in front of Kabush, riding strong and with the flawlessly efficient technique that had served him so well week.

Burke would ride across the finish line claiming first in Stage 7, with a time of 2:37:56 and first overall in Solo Men in 15:43:46. Kabush took second in Stage 7, and second overall, followed by returning BCBR racer Kerry Werner, ending an exciting singletrack battle between these friendly adversaries that made BCBR 2019 one of the most competitive in recent memory. 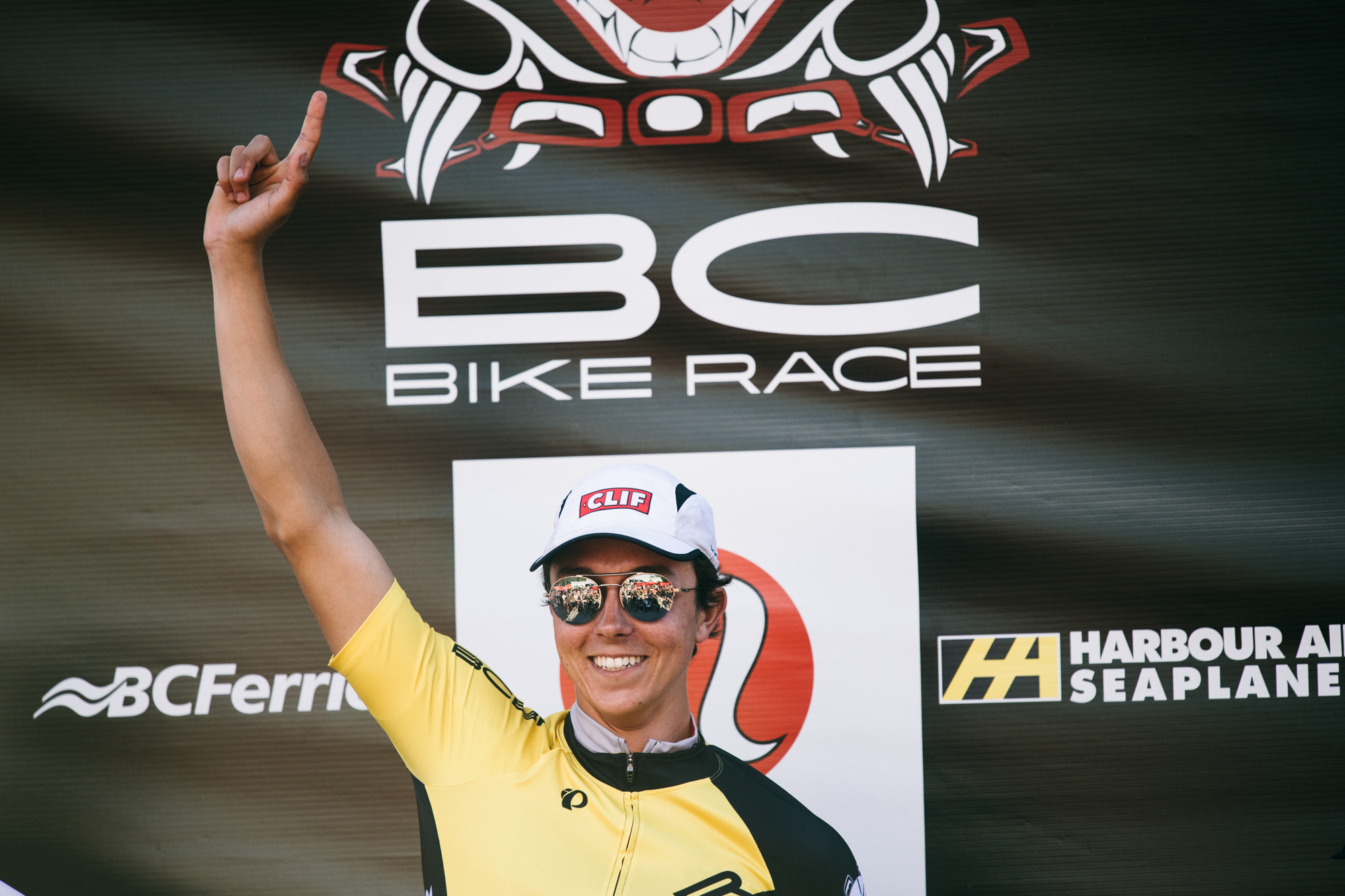 “I knew that if I could build up a lead that I could hold onto it. I’m super stoked, now it’s time to party,” said Burke, cracking a cold can of Hey Y’All in celebration.

In Solo Women, Katerina Nash proved invincible, winning all 7 stages and the overall crown with a cumulative time of 18:39:46 (Americans Courtenay McFadden and Jena Greaser took 2nd and 3rd.) She proved once again that this reigning singletrack shredding queen won’t easily be dethroned at BCBR. 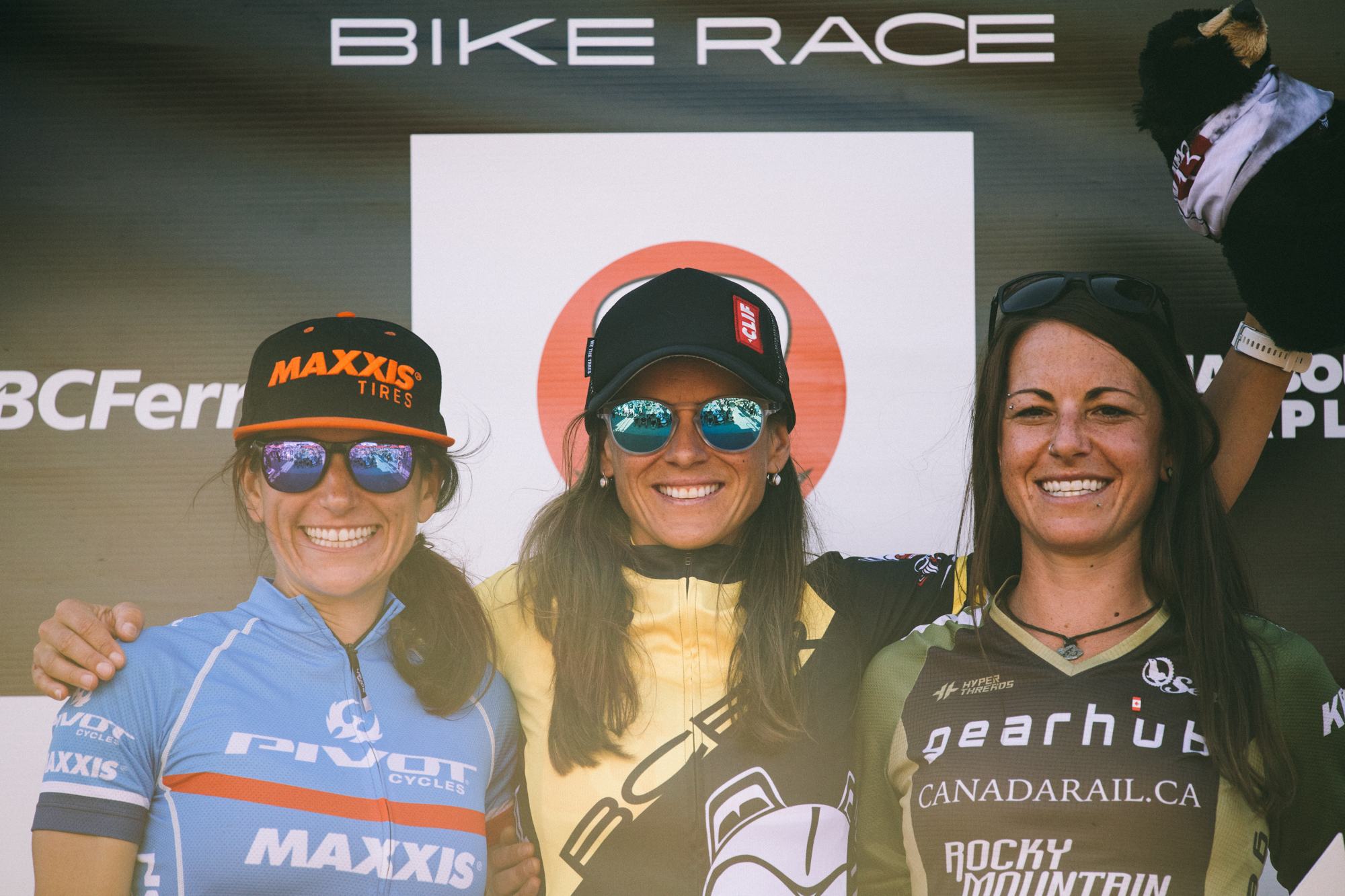 “I’m happy. My bike finished with the same set up that I started the race with. There were a few stages where I wish I had a different front tire but I was too tired to change it,” Nash said.”After coming back to BCBR numerous times I know the stages pretty well and I know the pacing.”

Bellingham-based McFadden, her first time in the BCBR, was elated following stage 7.

“My legs were smashed after yesterday. I could barely stand up in the shower,” McFadden. “This even was much harder than I expected.”

All week long Mike Rauch and Simon Blythe (Cahilty Racing) had slugged it out in the dirt with Graeme Martindale and Norm Thibault (TNA-Frontrunners) in Teams of 2 (Open Men.) Both twosomes suffered flats and mechanicals throughout the week. Today Thibault finished the race on a rear wheel borrowed from a spectator after blowing up his rear hub. However Rauch and Blythe would ride a strong Stage 7 to claim the top podium in this hotly contested category. 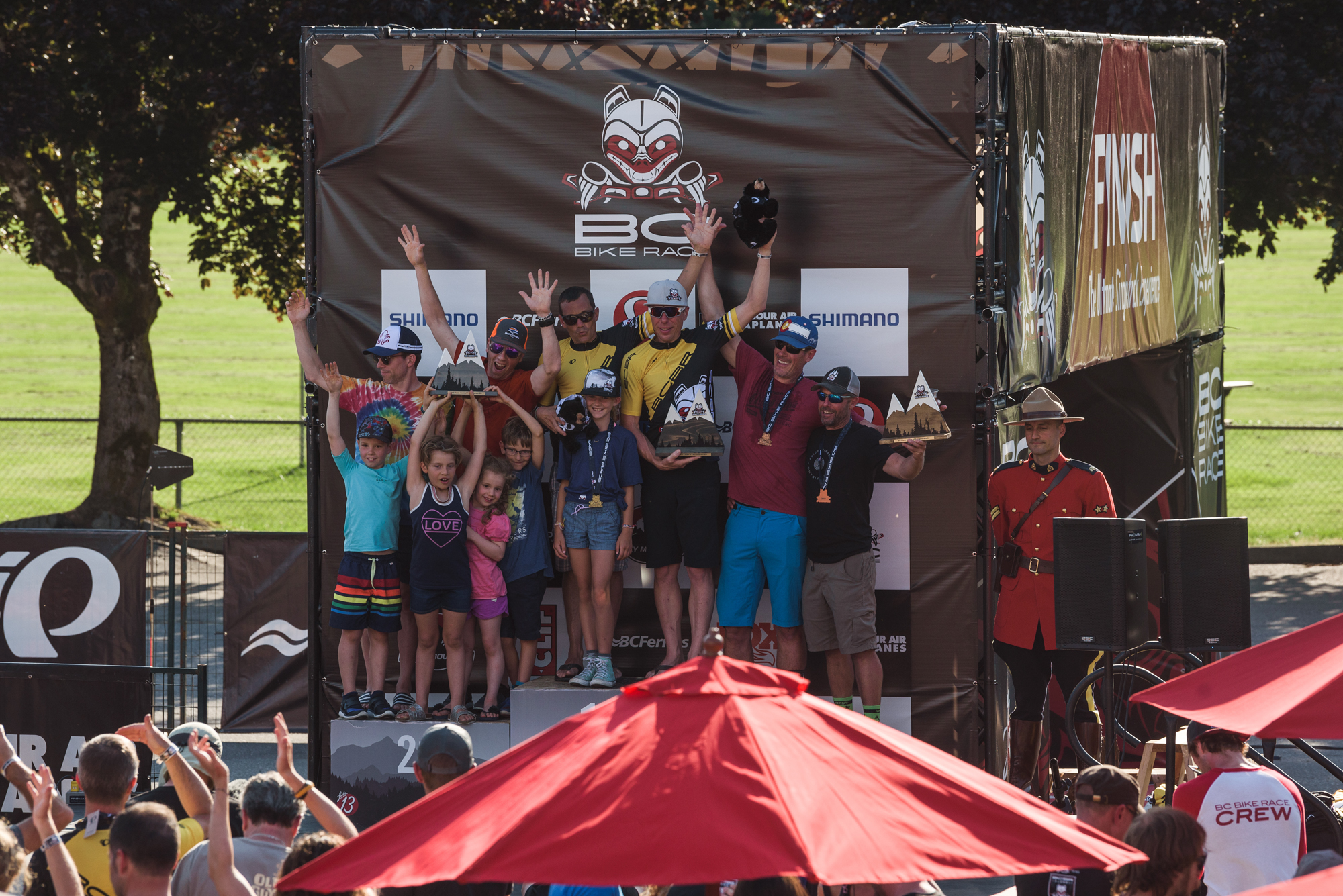 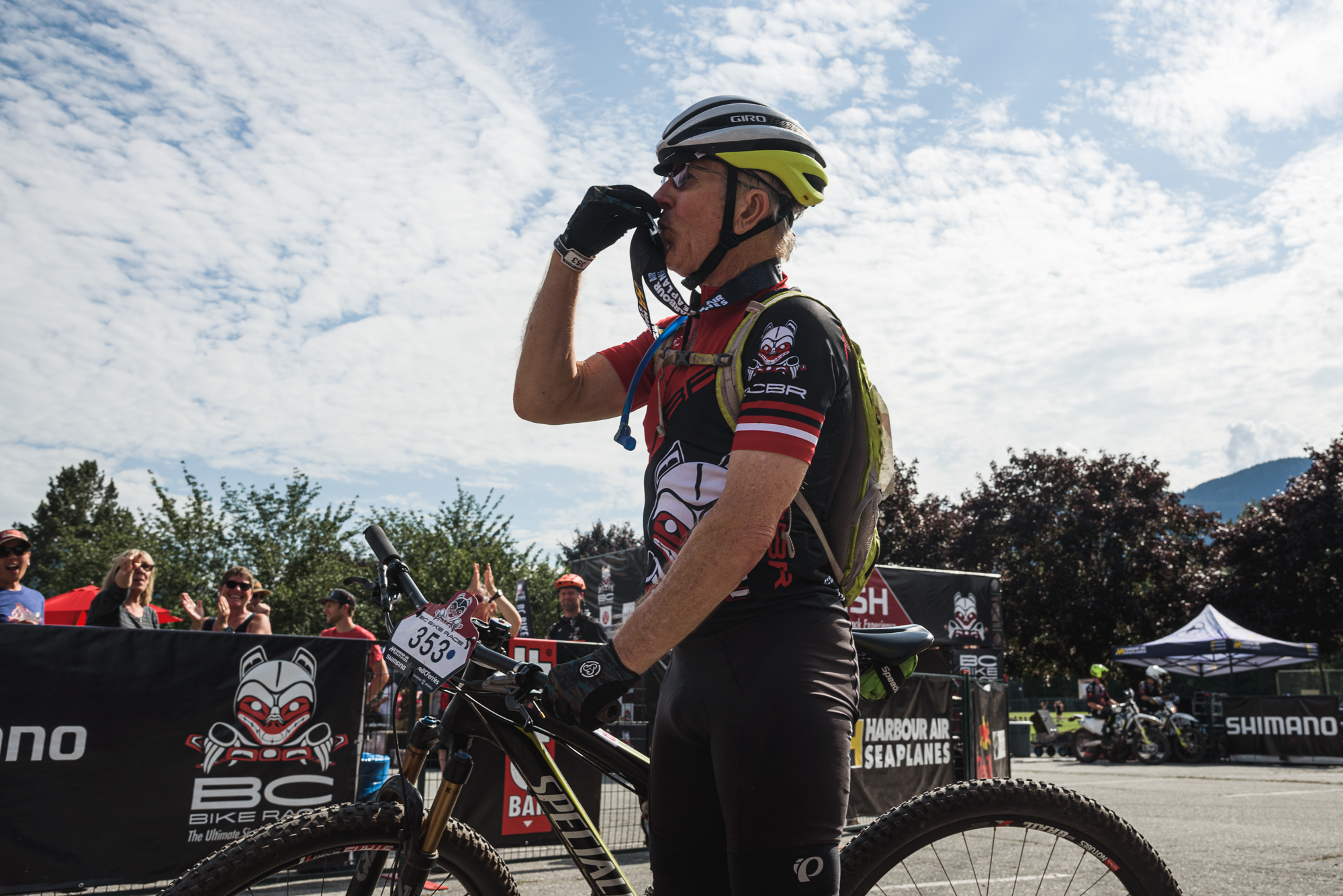 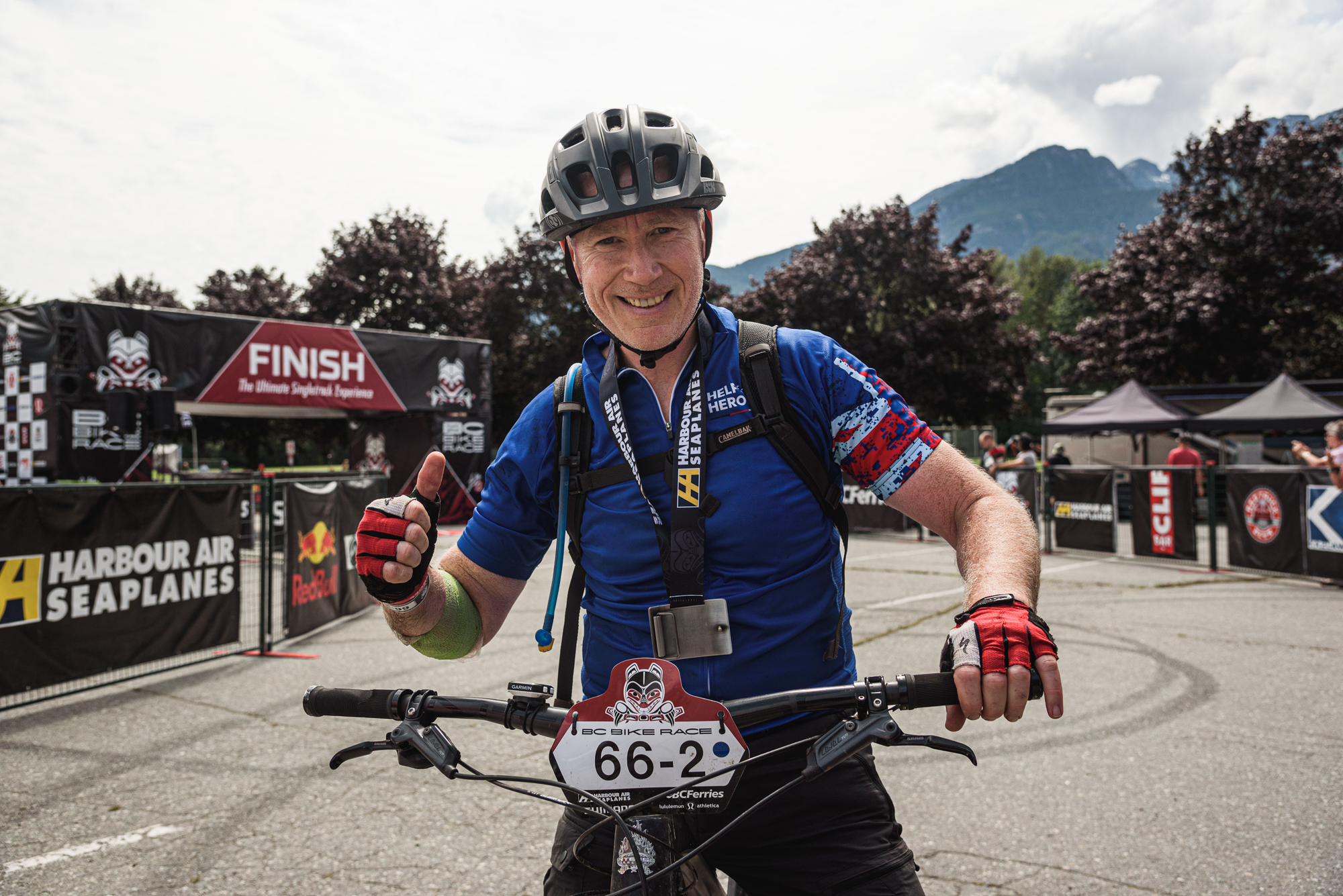 “I’m feeling  good but this race is definitely not getting any easier,” Russo said at the finish line.

With BCBR 2019 over, it was time to relax in the beer gardens, swap tales from the trails and sip some cold ales. For many it was time to engage friendships forged on the trail, the sort of bonds that mutually shared singletrack experiences tend to create. 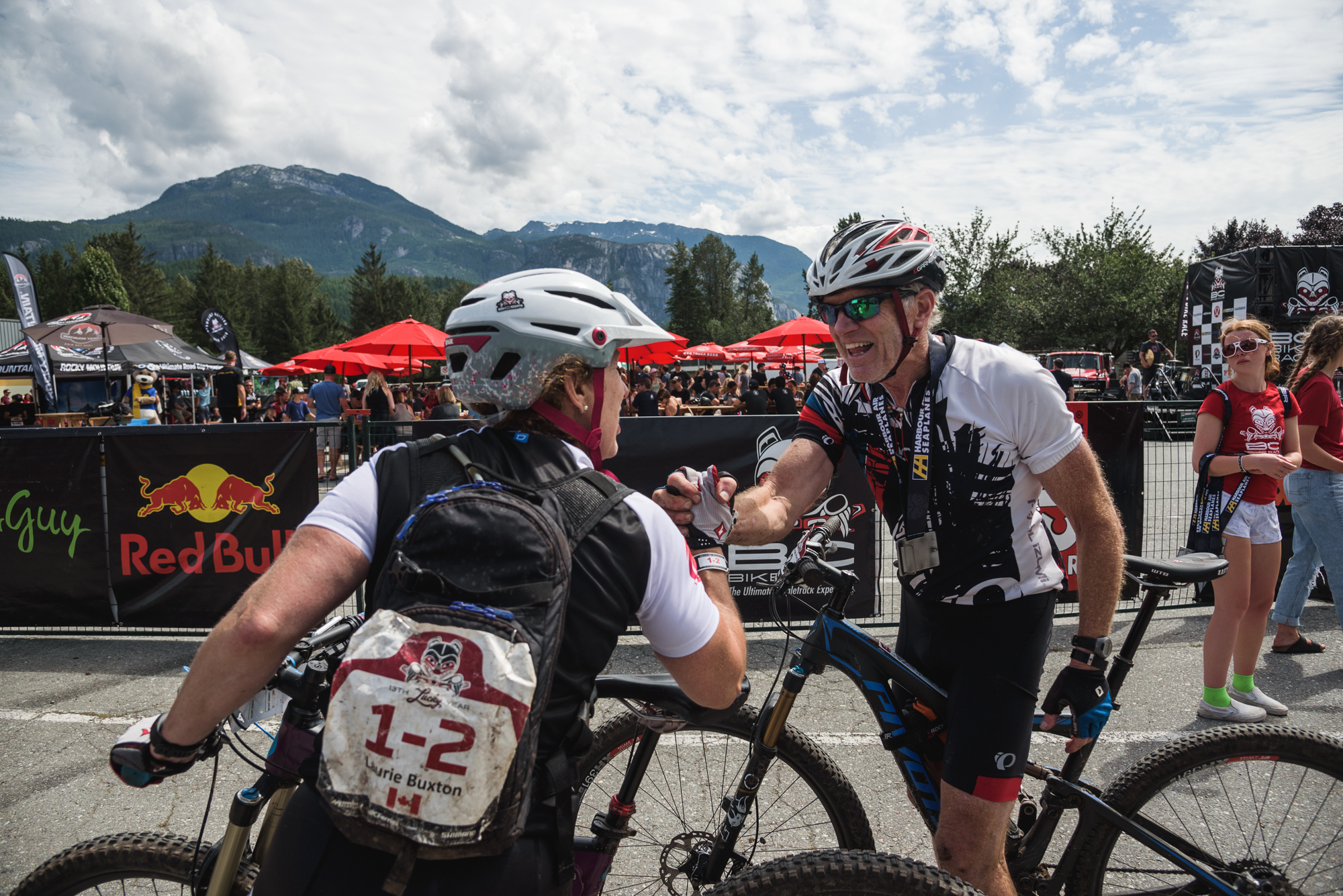 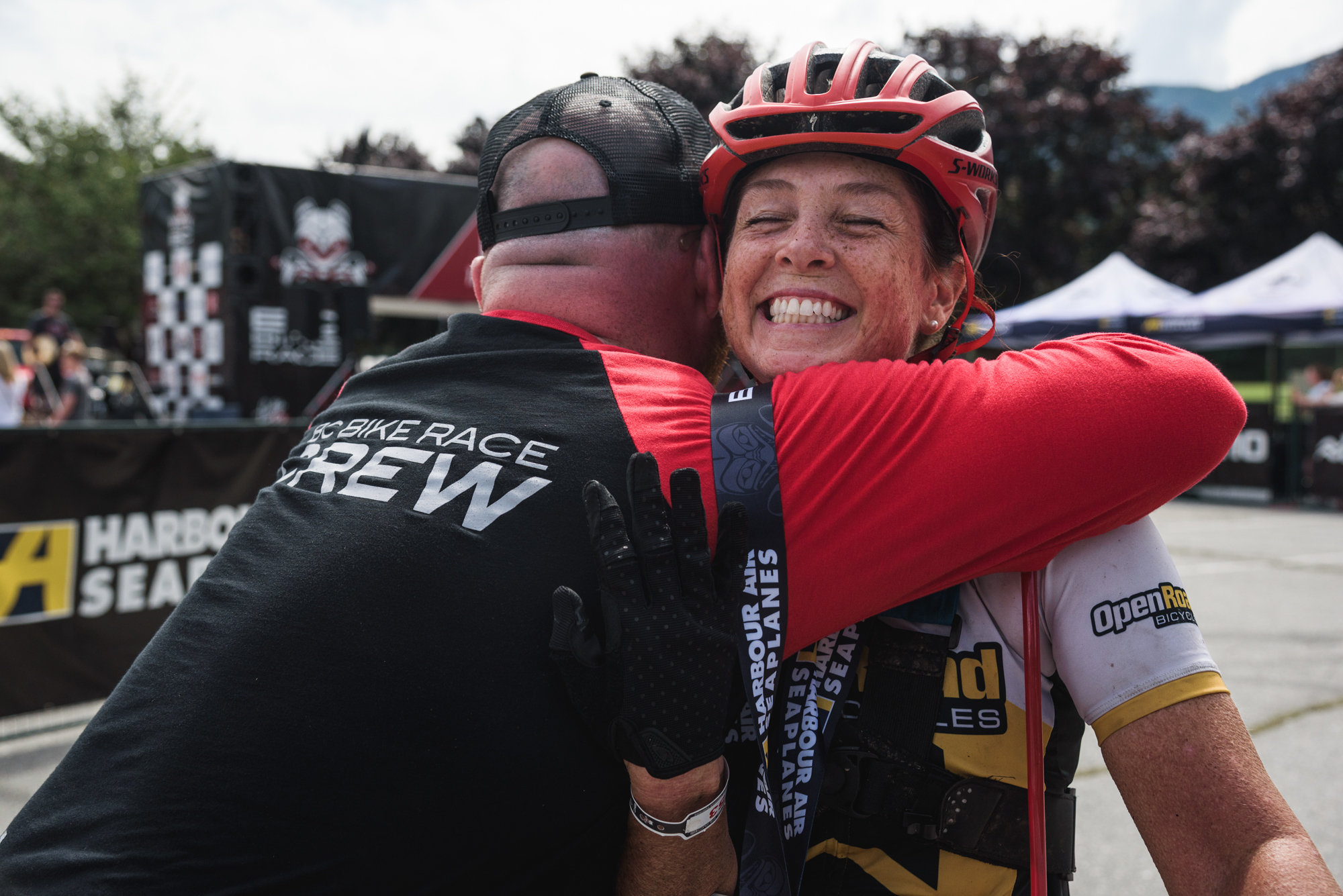 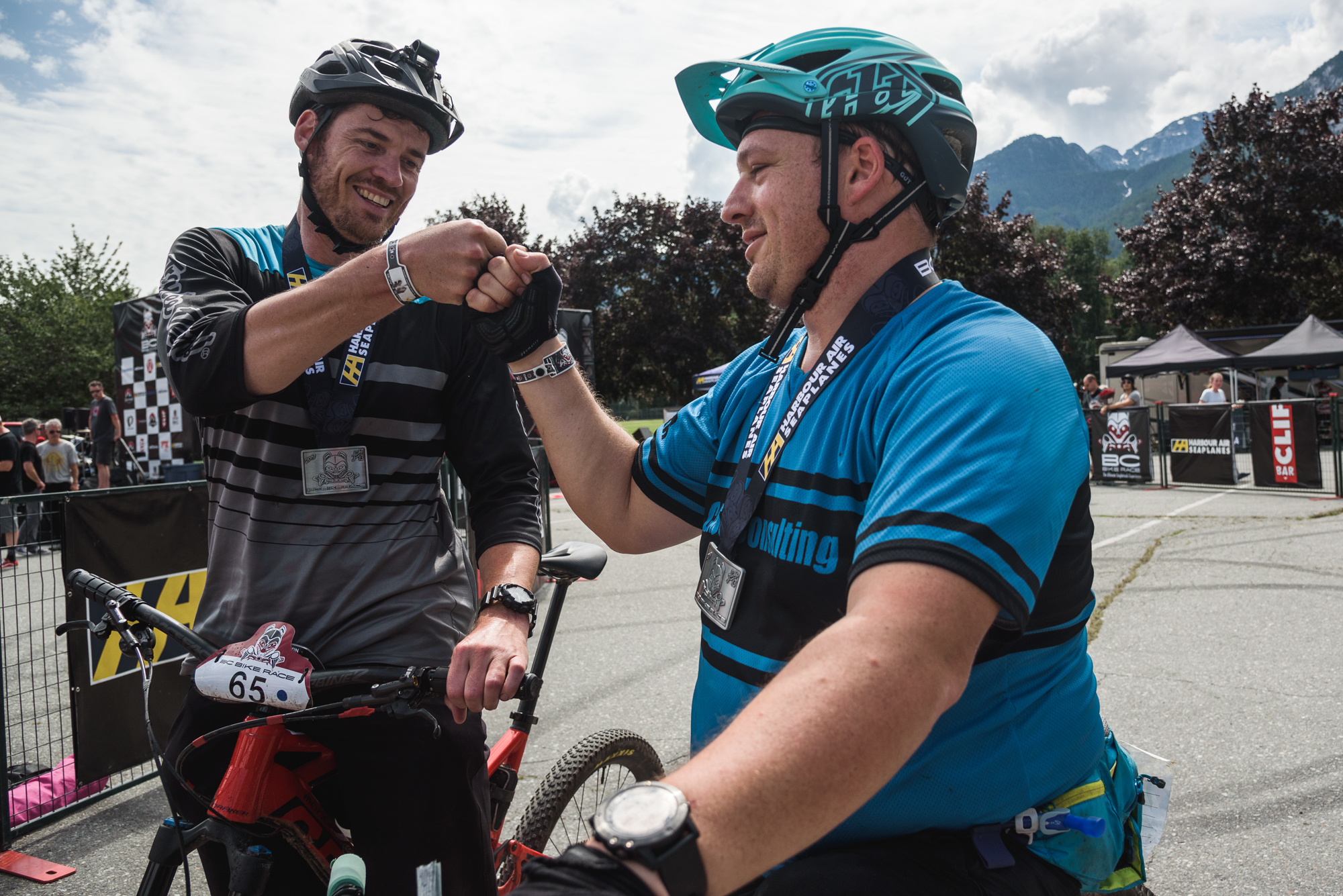 For race-fit sponsored riders, stage racing is as normal as walking in the park. But for most others, successfully completing 7 stages, totally roughly 300 km and 10,000 vertical metres of ascending is a lifetime achievement. There was plenty of emotion as racers crossed the finish line at Squamish’s Brennan Park under warm sunny skies to receive their BCBR belt buckle. But it’s more than a chunk of metal; it’s come to symbolize how people from around the world can be united to worship at the altar of BC singletrack, to suffer, celebrate and persevere to together.

Steve Thompson is one of seven members of the North Vancouver beer league hockey team The Chiefs to participate in BCBR 2019. They had almost as many Chiefs’ jersey-wearing fans in attendance as BCBR had medics on course. These gents have played hockey together for 30 years and they are also part of the growing BCBR mountain bike tribe. 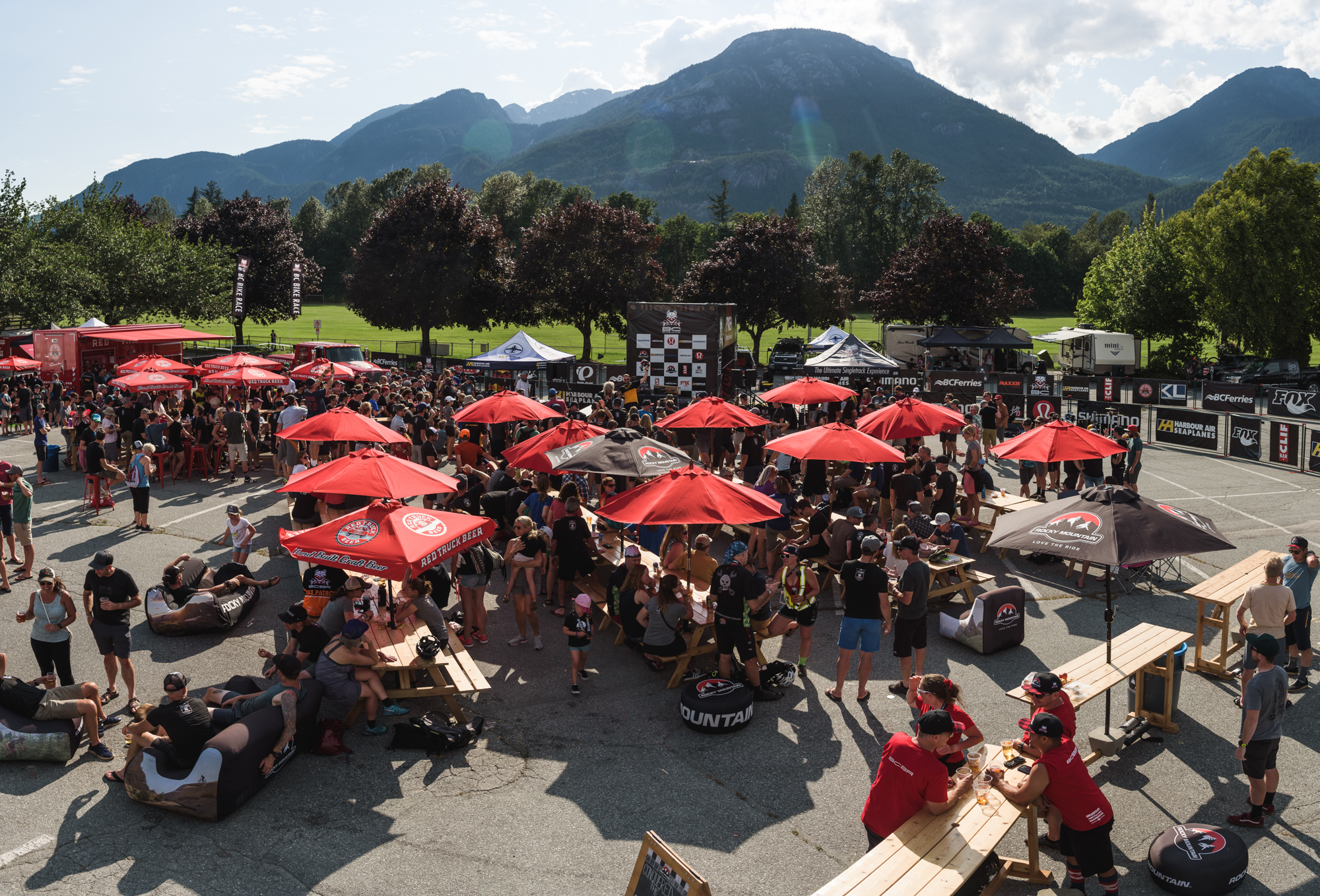 And even the pros feel the need to kick back after the rigors of the ride. Lululemon athlete and BCBR alumnus Tim Johnson brings a playful competitive spirit to the race as well as a great sense of humor.

“My arms are fried. I really felt it riding Half Nelson today with all those compressions,” said Johnson, who took 18th in Solo Men.

Over the course of a week of mountain bike racing a lot happens, but Johnson remembers Day 0 most vividly. when minutes before the start of the Prologue he got “iced” by his Lululemon teammates, which is racer-speak for putting a can of Smirnoff Ice in a cyclists helmet before a race and making the victim chug it.

“That Prologue was super hard,” Johnson said with a laugh.

Then there’s Austin Warren who showed up for the Prologue in a bunny suit that was as white as the driven snow, but as functionally inappropriate for mountain biking as a wet suit is to a polar bear. With each passing stage, the bunny suit evolved as Warren trimmed and cropped it for improved performance. Eventually the white of the non-breathable faux bunny fur began to take on the colour and fragrance of BC dirt and mud. But why?

“I was late to register so I asked BCBR if they’d let me enter if I wore a bunny suit all week,” Warren explained.

Turns out, some people will do anything to join the mountain bike tribe and immerse themselves in the BCBR singletrack experience. 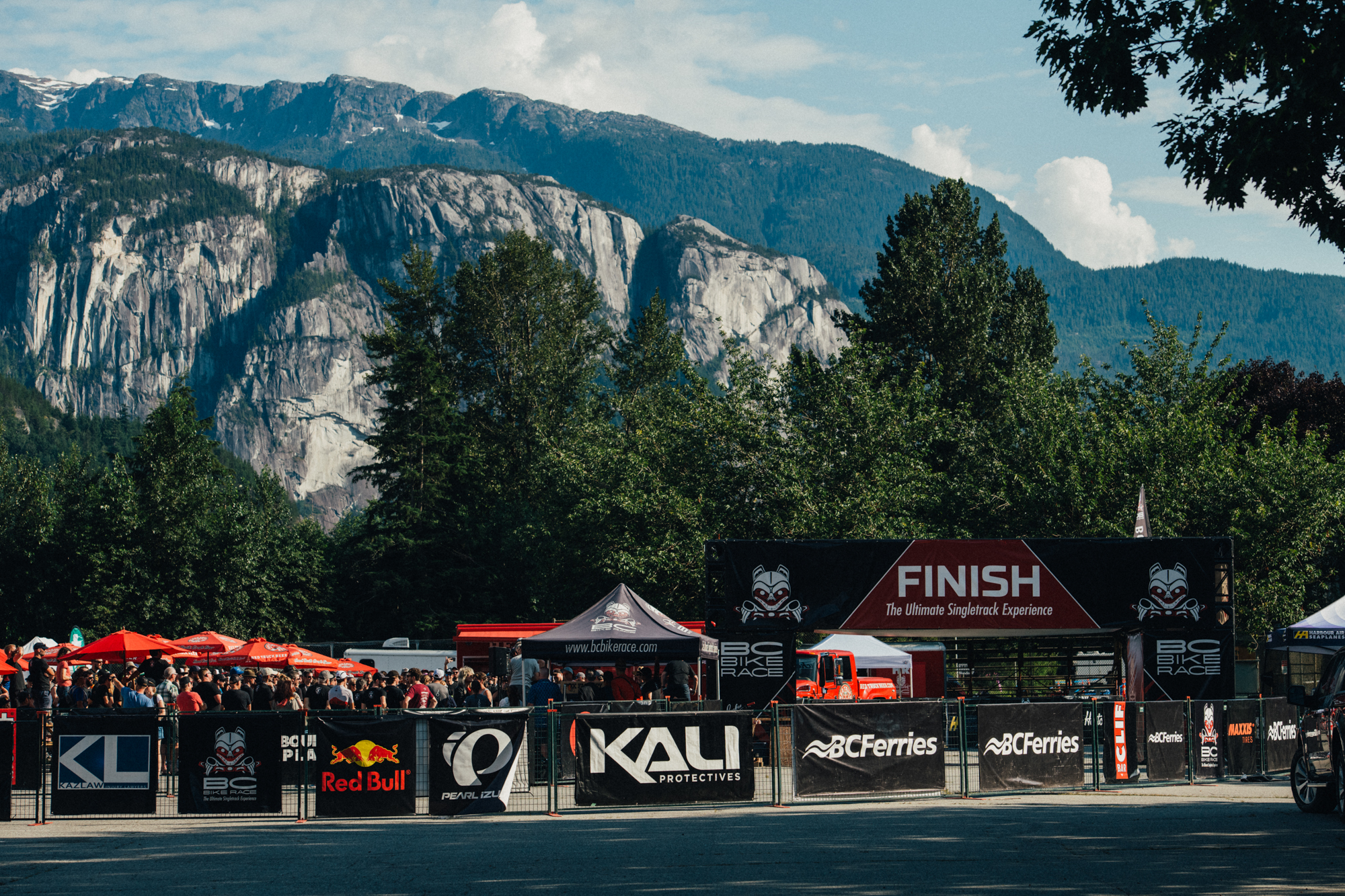